I must have entered the Twilight Zone, on my way from Backroads to the Bizarro World, in a waking sleep. For the second time in three days, I find myself having sympathy for Hick! Seems like only a couple days ago Hick had lost his head. Now it's his butt. He hasn't lost it, exactly. But it's been damaged.

It all started because I bought a collar and leash for our newest dog, Marley, 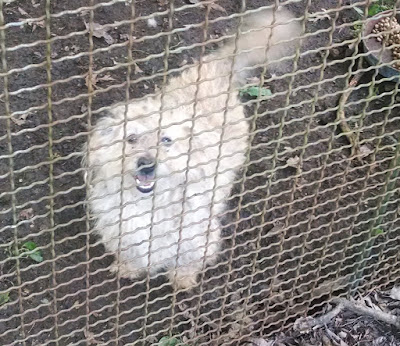 who we took in when HOS (Hick's Oldest Son) moved to town. Marley runs away when let out of the pen. So he stays incarcerated most days. Hick finally got with my plan Thursday evening, and took the collar and leash (less than $2 each at Walmart) to let Marley out of the pen for a while, and prevent him from running through the briars and burrs up to his old home.

"Marley walked real good on the leash. I took him over by my barbershop (Little Barbershop of Horrors, the themed shed). I was actually sitting on the step of The Pony's Knife Shack. I petted Marley. I brushed him--"

"With what? We had that old brush for Juno, but the pointy things started falling out."

"No! A currycomb. For a horse. I brushed him a while. Then I rolled him over and started rubbing his belly, and he STARTED GROWLING AND SNIPPED AT ME!" [I would have said SNAPPED, but it's Hick's story.] 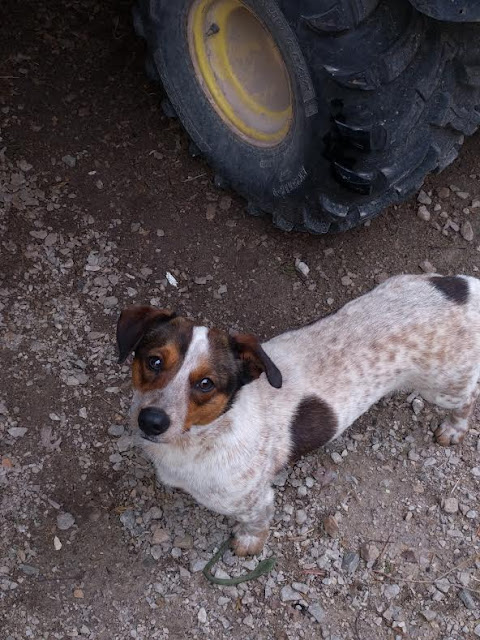 heard that, he went crazy! He run up on Marley and started biting him! I was holding Marley up, trying to keep him away from Jack, and they was both biting each other, and I tried to stand up, and got tangled in the leash. I fell over on the gravel there that runs by the sheds. I actually fell in between them. I thought, 'now I'm in trouble, I'm gonna get bit, too.' Me being in between them stopped them for a minute. I stood up and pulled the leash, and Marley didn't waste any time trotting along with me back to the pen. He didn't try to run out, either!"

At this telling, Hick was sitting in the La-Z-Boy. He showed me a big scrape on his elbow, from the gravel.

"I think I hurt my hip, too. Something in it hurts when I walk. I'm an old man! I can't be falling like that!"

"Were you brushing Marley's belly? Maybe you hurt him. Pulled his fur."

"No. I was done combing him. I was just rubbing his belly. He's snipped at me a couple times before. I said, 'MARLEY! BAD DOG!' And he quit. But when Jack heard him growl at me, he went nuts."

"They're very loyal, heelers. From what I've read, anyway. And we know Jack is no angel."

"He was doing fine when I was walking Marley around. Ran up and sniffed him. They seemed to be okay with each other at first."

"So... you picked up Marley when Jack attacked him?"

"Wait! You lifted him up by the leash? You could have choked him!"

"I didn't have time to do anything else, Val. I was trying to get them apart, and stand up. He's fine. I yelled at Jack, and he quit when I walked Marley back to the pen."

"Well, I guess we'll need a few more sessions before Marley is ready to be let loose. He didn't have a fair fighting chance, being on the leash."

"Yeah, I think he was ready to run off instead of fight."

Poor Hick. I hope his bum hip doesn't inhibit his Storage Unit Store business. He says he's not selling on Friday anyway, because he's going to help our neighbor spread some gravel. From the seat of the tractor, I assume.
Posted by Val at 1:05 PM