I came upstairs the other night to see Hick folding his laundry and watching TV. Neither of those situations are shocking. He's been doing his own laundry since right before Genius was born, because he made that choice rather than pick his dirties up off the floor and put them in the hamper for me. He's always watching TV when I come upstairs around supper time. Usually The Andy Griffith Show, now that his obsession with MASH seems to be over.

The shocking part is what Hick was watching. It was Ice Age 2. There's nothing wrong with Ice Age 2. I've never seen it myself, even though I'm sure I took the boys to see it. I have absolutely no memory of any of the characters or plot. I DO recall the original Ice Age. The movie, smartbutts! Not the first cooling of the earth!

Anyhoo, I thought maybe the TV had been left on that channel, and Hick was sitting over on the long couch away from the remote, folding his tighty-whities on the coffee table. Or maybe he was trying to figure out that familiar voice of the mammoth. So I said,

"That's Raymond, you know. Ray Romano. The voice. From Everybody Loves Raymond." That comes on sometimes after Andy Griffith.

"Do you want me to put it on something else?"

Well. That was indeed kind of freaky. I never would have thought Hick would sit and watch Ice Age 2, by choice, and start relating the plot to me. All these 30 years, and I'm still discovering things about Hick. He's a true international man of mystery.

The other shocking thing concerns the problem with FRIG II's ice maker. I took that picture, and told you the tale. What I didn't tell you was that I took TWO pictures. The one I originally posted, and one with my phone held slightly inside, to show you the belly of that beast. When I viewed the picture on the monitor of New Delly, I gasped. 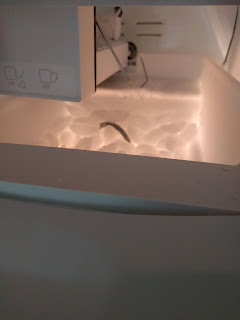 I might have shoved back in my rolly chair. What in the NOT HEAVEN was that in my ice? I had just filled two bubba cups! It was only ice cubes. Nothing in there. I'd put back the bin, and taken my pictures. When had something gotten inside?

YUCK! I was almost sick. Was there something foul in my bubba cups with my half-moon cubes? One was already filled with water, and the other was a spare for adding to my 44 oz Diet Coke. Dang it! That looked like a worm! We don't have worms. Only millipedes. Had one gotten inside FRIG II, and dropped down from the top when I slid the bin back in? NO NO NO! Don't let that be a millipede in my ice supply! I refused to pop the lids off my bubba cups to look. I figured I'd peep inside the bin when I went upstairs at supper time. As you might imagine, I was not looking forward to this investigation.

I didn't mention my predicament to Hick. It was his Ice Age 2 night.

Finally, the time had come. Time to stop being such a baby, and face my fear. I couldn't put it off any longer. I opened up FRIG II, and peeped inside.

I am SUCH AN IDIOT! It was the silver metal coily thing that rotates to move ice forward.
Never mind.
Posted by Val at 1:03 PM