A New Theme Has Attached Itself to Val, and It Stinks

Great jumpin' Jehoshaphat! After yesterday's post, you'd think I sat people down in my dark basement lair in a broken rolly chair, and zapped them with a doggie shock collar* to make them read about Hick's poop!

[*A feat which The Pony, Genius, and Friend did after Thanksgiving dinner one year, under the auspices of "testing" the shock collar (for small dogs) before using it on formerly horse-chasing Puppy Jack.]

No! If you sense at the beginning that you don't like the way the tale is going, STAAHHHP! As hipster Genius might say. No need to read on. Skip it. Come back another day. I can't please all of the people all of the time. I rarely even try to please any of the people. You don't have to read it! That won't hurt my feelings.

You might think I nabbed the idea from joeh, who gave us a classic comedy recording, a retro fart contest, on his own blog the previous day. Nope. My post was already in the can (heh, heh, see what I did there, I said THE CAN when referring to my post about poop), scheduled for automatic publication, by the time I read Joe's windy tale.

Anyhoo... yesterday's poop is gone with the wind, and it's time to move on.

When I pulled into the driveway Tuesday afternoon with the weekly groceries, I saw Hick on his clandestine lawnmower (the one he bought without telling me until I saw him riding it and asked where it came from) at the front of the field. He waved a cheery greeting, and I waved a COME HERE. Hick dutifully drove down to garage, where he made a circle around the concrete carport area, blades still spinning, creating a PigPen-like cloud. Always one to make a grand entrance, our Hick. He climbed off the lawnmower, turned his back to me, and said:

Holy crap! I recoiled in horror, mentally filling in -- as PANTS! But no, he said BOOTS, and held up one, knee bent, so I could see the sole.

"Yeah. It's full of poop. The front part, and the heel. It's on the side of the other foot, too." 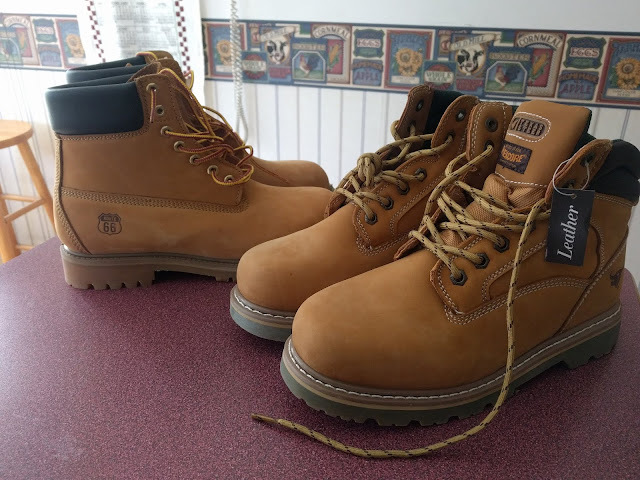 That pair in the back, with the light-colored soles. He wears them every day. The lug soles were filled with poop.

"You're gonna have to let them dry out, and then pry out the poop. It's gummy. You'll never get them clean until it's dried. Better put them up somewhere high, so the dogs don't get them."

Meaning Copper Jack. Our dogs don't usually chew on shoes, but my little Jack might be tempted

"Where did you step in it? Our dogs poop in the woods, by the sinkhole. That's their toilet. I never see poop in the yard."

"I was down by the cabin. At the creek."

Hick carried in groceries for me. Just inside the kitchen door. He always finds a way to slack! I picked up a couple things that were awkward, like a pizza in a cardboard box from the Walmart deli, to carry to the side porch, so Copper Jack couldn't grab it from T-Hoe's rear, and so Hick wouldn't have to walk back down the steps for those items.

"Whew! The whole garage stinks like poop, and you only walked through it! Don't even step inside the house anymore. Just set the bags down inside the door. I'll get them. That stinks SO bad! I think it's CAT poop. Not dog poop."

"It was on the sand bar in the creek, down at the cabin."

"I thought cats buried their poop."

"Probably not OUR cats! Maybe the sand was wet and they couldn't paw it over. But that stench is definitely CAT poop! Don't blame the dogs. Why would THEY poop on a sand bar? They'd just go in the woods like they always do. I'm not even sure it was OUR cats down there."

"You'll have to leave them outside, to dry out. Maybe in the back of your truck. It's under the carport, in case it rains."

I don't know where Hick put his poopy boots. I'd rather know how he managed to step in cat poop on a sand bar WITH BOTH FEET if he saw it there.
Posted by Val at 1:03 PM