I call shenanigans! Government waste has got to stop! I expect more for my tax dollars!

Let the record show that I mail a letter each to Genius and The Pony every Friday. That's the routine. It started when Genius moved two hours away to college at the tender age of 18. I communicated by phone and email, but my mom sent Genius a letter and six dollars every week. Genius cherished those letters, most likely because six dollars would buy him a bottomless cup at a beer blast every weekend (even though he SAID he used it to buy himself a weekly meal at a local Chinese restaurant). Six dollars is a big deal to a college student!

Anyhoo... when my mom passed away during Genius's sophomore year, I stepped up to mail him six dollars every week. You might say he was the six-dollar son. I continued until he graduated, at which point I stopped the six dollars when he started working, but kept up with the letter. Of course I couldn't do any less for The Pony when HE left for college at the even tenderer age of 18.

I like to have interesting stamps to put on their letters. I'm sure they don't even notice the stamp as they rip open the letter, Genius to get to the scratchers I send him, and The Pony to get to his enclosed cash. They both swear they read the letter all the way through.

I was not pleased with my last batch of stamps, which were cactus flowers. They were bright, but not something I associate with mailing a letter to my boys. Not that there's anything wrong with that. I was pleased to stumble upon a story on the internet that NEW STAMPS were coming out on August 1. They are a collection of working police dogs. Well! How can you go wrong with a working police dog on your 20-something sons' letters?

The parking lot at the main post office over in Sis-Town was nearly full when I pulled into one of the two remaining spaces on Friday morning. Huh. I hoped they weren't all there buying working police dog stamps! More likely they were mailing important things, it being the first of the month. I grabbed the boys' letters (already stamped with 2 of my last 3 cactus flowers), and my stamp money, and headed inside.

Not sure where all those people were, but a man and a woman were filling out forms, a dude was trying to find a missing letter, and a lady was having her envelope weighed. I was next. Only waited about two minutes.

The mail woman asked how she could help me. They're generally polite in this facility, except the time I was there to demand that only OUR mail be put in EmBee, and that OUR mail be kept out of the mailboxes of people up the road. The nerve of me!

Anyhoo... I pushed the boys' letters across the counter.

"These are ready to go, and I'd like a book of stamps, please. The new police dogs."

"Oh. We don't have them yet. Didn't they just come out yesterday?"

She wasn't asking me. She was asking the mail clerk at the next window. Which isn't even a window, just a different place on the long counter, but their wooden thingies they set out always say "Next Window Please."

When she said they didn't have the stamps that came out the previous day, my 13-year-old-self wanted to say, "Why not? Couldn't the post office deliver them on time?" Heh, heh. I'm usually able to control my 13-year-old-mouth. I figured she wouldn't think I was half as funny as I thought myself.

The mail woman saw the clear-wrapped bundle of stamps on the back counter, and pulled out a book of them for me. I almost fainted with shock. I think my chin hit the counter. I'd asked for them, though. So I had to take them. 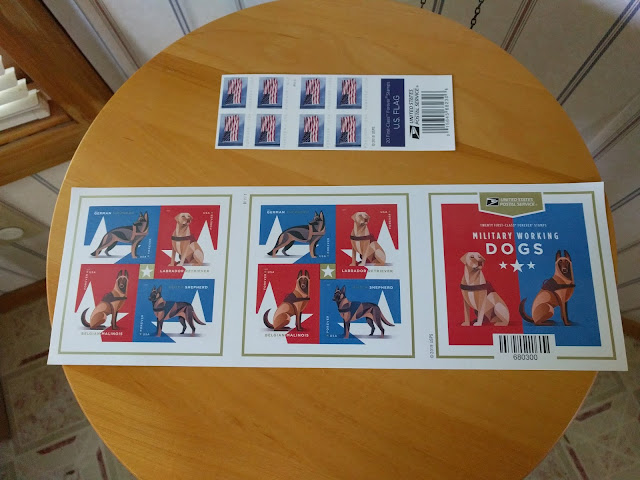 THEY ARE HUGE! A book of the new working police dogs (technically, Military Working Dogs) is bigger than the largest scratcher ticket! It dwarfs the newest version of the flag stamps. That's where I have a problem.

No wonder the USPS is running out of money! I'd say you could make SIX flag stamps out of the sticky paper it takes to make ONE dog stamp! Both kinds cost the same, $11 for a book of 20 stamps, 55 cents apiece.

I'm gonna hafta adjust my address on those letters. Like Hick said, "Good thing you write small!" No way you could use this on most return envelopes with your bills. They'd cover up that cellophane address window. I like the design, though: 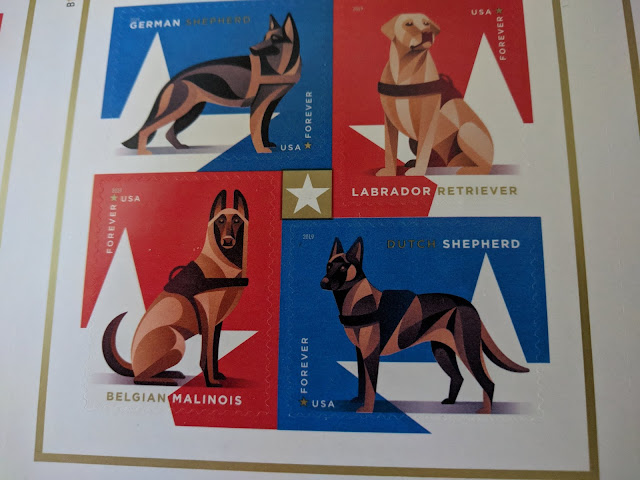 I just don't think I'll be buying them again.
Posted by Val at 1:04 PM