Val Never Snitches, 'Cause She Don't Want No Stitches

There was a rash of unreported crimes in Backroads on Thursday, because Val didn't say something when she saw something. You might imagine how hard it is for Val to let infractions go unreported, what with 28 years of teaching under the belt she doesn't wear.

Both violations happened in broad daylight, around high-noon-thirty, at Orb K. I'd just turned onto the parking lot, about five car-lengths behind a gray SUV that looked like my old Yukon. It kept right, driving down the aisle by the gas pumps, while I stayed straight, going down the aisle between the store and gas pumps. I'll be darned if that gray SUV didn't dart across in front of me, to park in a space in front of the store! I don't know why people do that.

Anyhoo... my preferred parking space by the handicap ramp was taken. Not a big deal, I continued down the row and parked near the end. There were plenty of spaces, perhaps 8, to choose from. What IS the big deal is that the gray SUV parked in the ONLY HANDICAP SPACE. Right on the wheelchair symbol painted on the blacktop. Right in front of the sign on the building.

At first, I didn't think anything of it. I assumed they must have somebody handicapped inside. Yet when I walked by it, going up the ramp beside that gray SUV, I saw nary a handicap license plate, nor a handicap placard hanging from the mirror or propped in the windshield, nor anybody who looked differently-abled. Not the two women in the front seats, nor the man in the back who opened his door and sat sideways to let his legs cool off, I guess, while one of the women went inside.

Of course I didn't say anything. I'm not The Heat! You can get your head ripped off for daring to call someone out on their shenanigans. And these days, your head getting ripped off could go viral. I don't like to call attention to myself.

But that's not all! The reason I was walking up that sidewalk ramp right beside the handicap space, after walking along the backs of the parked cars rather that climbing on the sidewalk way down the row, with the aid of T-Hoe's hood, was...

A BODY ON THE SIDEWALK!

Okay. Maybe that's a little sensational. You know Val would never intentionally over-sensationalize an event, just for a blog post!

I had actually intended to step up on the sidewalk when I climbed out of T-Hoe. But I looked along my path, and saw a dude crouched at the corner of the building. You know how really thin people kind of sit on their heels? I've never done it myself, but I've marveled at semi-skeletonous people doing it. Well! No way was I traipsing past somebody whose nose would be less that three feet from my ample rumpus!

Dude was heel-sitting next to the metal mesh cage that houses the mini propane tanks for gas grills, his back against the brick wall of Orb K, right under the sign on the brick wall that says NO LOITERING. His elbows were on his thighs, his hands together between his knees. I assumed he was texting, or playing a game on his cell phone. I kept an eye on him during my trek across the parking lot behind those cars. Not that I could run away or fight back, but I am at least conscious of my surroundings.

The closer I got, the more it seemed as if Dude wasn't really doing anything with his hands. I daresay his eyes might not even have been open. Okay. That's creepy. I told myself he was probably just catching a little catnap there in the shade of the building, perhaps during his lunch hour. It WAS around 12:30.

Yeah. I'm sure that was it. Never mind that he could have sat in his car if he had one. Cars are good for catnapping. Better than corners of buildings while sitting on your heels. It wasn't my place to go over to him and kick his foot or take his carotid pulse, right? That kind of intrusion on a sleeping heel-sitter can get your head ripped off.

I'd convince myself that I should stop stopping at Orb K, but while I was there, I bought THIS: 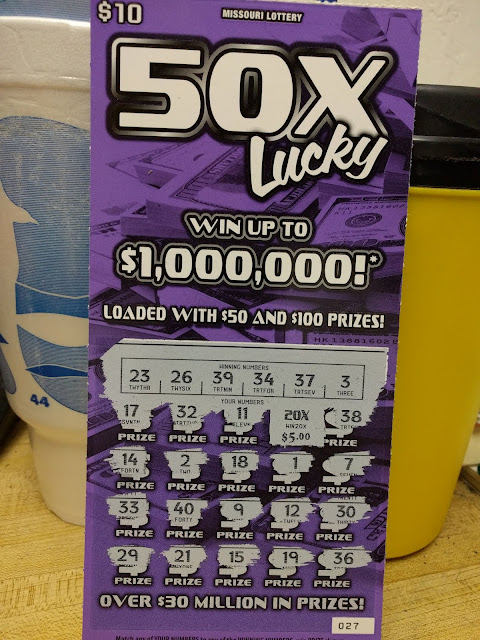 That's a $100 winner on a $10 ticket. A reward for my law-abidingness, perhaps. I doubt the able-bodied parkers and the loiterer had a hundred-dollar winner.
Posted by Val at 1:02 PM