Allegedly, Val is an -IST

Friday, I noticed an interesting vehicle on the parking lot of The Gas Station Chicken Store. It was parked with the door open. I think I saw someone move inside. Not sure. I was twisted around backwards trying to get a picture. Not because I was documenting possible evidence. Because I was going to send it to The Pony. 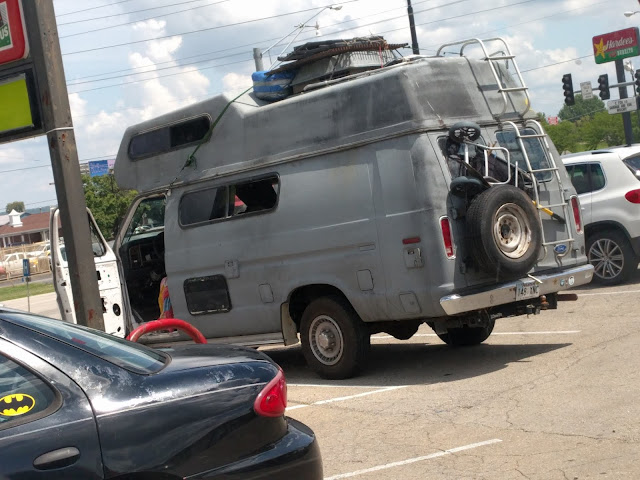 "Am I a "classist" for putting my purse out of sight when I went in The Gas Station Chicken Store for my 44 oz Diet Coke?"

"Maybe when you actually have some money, you might see the world differently. Or I guess other people might be hiding their purses from YOU!"

"If you got an over-the-shoulder purse, that classism wouldn't be a problem."

"I have one, but only for gambling. I don't haul my regular purse into every store with me."

Here's the thing. I'm not accusing those van people of being thieves. It just looks that way, because they're driving that van. No. Wait. That's not how I meant it to sound. I generally leave my purse sitting on the passenger seat as I dash inside for a few items. If I see any people hanging out, or sitting in a car nearby, I put my purse out of sight, no matter how new or old the car is.

When I go in Walmart, I ALWAYS put my purse out of sight, because I know I'll be inside for a while. Likewise, I don't even take my regular purse to a casino, because I won't leave it in the car, not even the trunk, because of valet parking.

See? I don't think it's so wrong to put my purse out of sight with an open van sitting right there. It's just bad optics. The Pony calls all white vans "raper vans." But you don't see me calling him a... um... a... "ra-something-ist!"

Of course, some people I park next to probably take one look at my 2008 T-Hoe, and stuff their purse way up under the seat.
Posted by Val at 1:06 PM