"Can you send me a picture of your little pole?"

Something I never thought I'd be saying to Hick. Don't freak out. It's not like it sounds! I don't want to put THAT picture in anybody's head.

Hick is quite proud of his little pole. In fact, he had it out at the Storage Unit Store on Wednesday morning, waving it around, showing it to the units' owner. Yes. He IS one to brag. Hick's little pole is three feet long. He's going to offer his little pole for sale at $12, but he'll probably accept an offer of $6, bottom line.

Hick had spent part of Tuesday afternoon over in the BARn, fiddling with the tip of his little pole. It's actually a FRANKENPOLE, made of a broken-off fishing pole, a different metal tip, and a reel that was bought in a 5-gallon bucket of reels for $10. Hick takes the reels apart to fix them. He says most of the time the problem is that somebody used grease on them instead of oil. I had thought maybe it was jammed line, but I guess any old fool can fix that, without giving away their reel.

Anyhoo... Hick was as happy with his little pole as Gizmo the mogwai sitting under Billy's Christmas tree, tooting a toy horn and waving a candy cane. Like poor Gizmo, Hick's joy was also short-lived. After showing off his little pole to his buddy, casting it a dozen times to prove that it worked, Hick put it in SilverRedO, and headed to Walmart for an oil change.

Hick left his little pole on the floor of the truck, the tip leaning against the seat. When he climbed back in SilverRedO with new oil, he noticed that his little pole was laying across the seat. Closer inspection revealed that THE TIP OF HICK'S LITTLE POLE WAS BROKEN!

He'd already driven off the lot when he made the discovery. So he couldn't go back and complain without them questioning why he thought THEY broke his little pole. At least they didn't forget to replace the plug after the oil change, and burn up his engine, like they did with a young pre-ex-mayor.

Hick thinks that when a worker opened the door to vacuum the floor of SilverRedO, he either leaned on the pole, breaking it against the seat, or lifted it up to lay on the seat, and hit the tip against the ceiling.

Don't you worry about Hick's little pole. He took it over to the BARn for repairs. It's just a little shorter now.

As with all pictures taken by Hick, you either get all background and a tiny subject, or a tight closeup that neglects to show all of the subject. 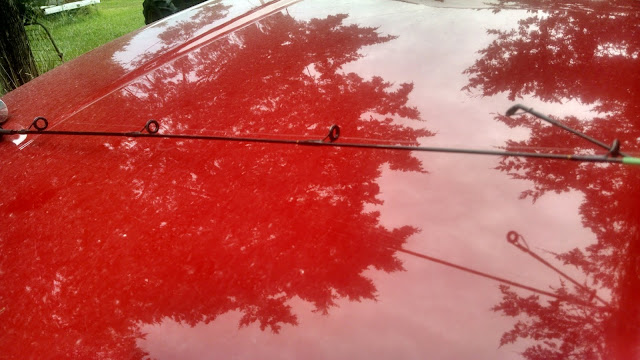 Below is the repaired version. 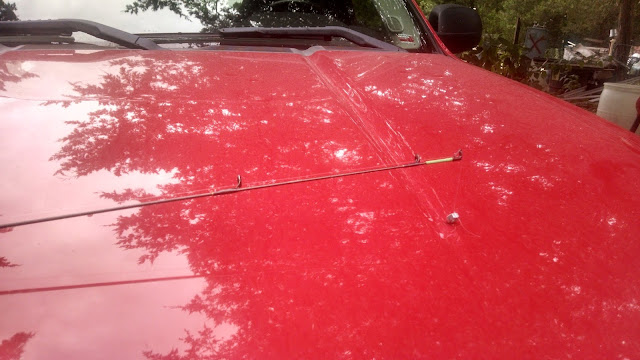 Yes. I, too, thought you'd be seeing the entirety of Hick's little pole. I mean, c'mon, it's a LITTLE pole! But for some reason, Hick didn't deem the reel end to be important enough for viewing. Though he did include part of his junk collection in the background.
Posted by Val at 1:03 PM