With Faux Sadness, I Announce: Hick Has Lost His Head

Don't you worry about Val. The loss of Hick's head doesn't affect her in the least! It's not like Hick actually used his head every day. Or even occasionally. It's been years, I think, since Hick even remembered that he had a head.

Of course, when Hick discovered last week that he'd lost his head, he was a little bit sad. At one time, he was pretty attached to his head. He's asked for it for Christmas one year, and The Pony and I bought it for him at an indoor flea market. The Pony had to show me where to find Hick's head. But I'm the one who asked for it, and paid the bill. $65 for Hick's head! I think he was worth it. He'd been wanting a head for a long time.

I have pictures. You might not want to look at them. Hick's head is lost, but it's not gone. The pictures show the carnage. If you have a weak constitution, you may not want to look. Or you might want to make sure you're sitting down, and have some smelling salts strapped around your neck so if you fall over, they may land near your nostrils and revive you. We'll start with the tale of Hick's head, so you can mentally prepare yourself, and decide on whether you want to see the pictures.

"I went down to my cabin, and there was crumbs of stuff all over the floor! Then I saw what it was! I guess them mice down there have eat my deer head! The nose and antlers was on the floor!"

"Was the head still on the wall?"

Later that night, I hollered up the stairwell: "If you go down to the creek, send me a picture of your mouse head. I mean DEER head! Eaten by the mice!"

It took a while. I guess maybe Hick had to recover from the trauma. Here come the pics. 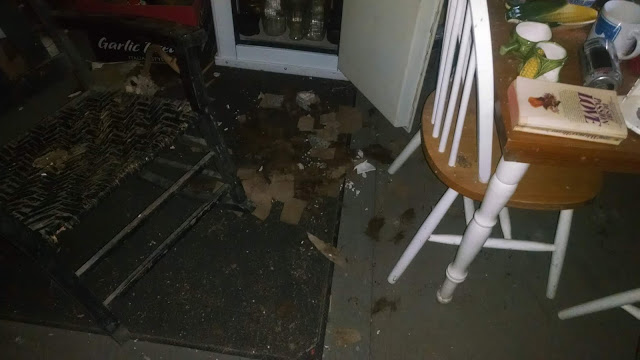 Yeah. That's little bits of fur. I don't see the nose, myself. Or the antlers. Maybe Hick set them aside. Maybe I'm not looking hard enough. I saw that book, though! I swear is says PASSION. And it's laying face down.

Has Hick been reading romance novels on the sly? I asked him, and at first he denied having a book down there. Maybe because I accused it of being pr0n. Pic means it happened! He was looking within seconds. Said it was a western! About a man who married a woman who sent for her daughter, who the man's buddy wanted to marry his son. Pretty quick with that synopsis. I might believe him... 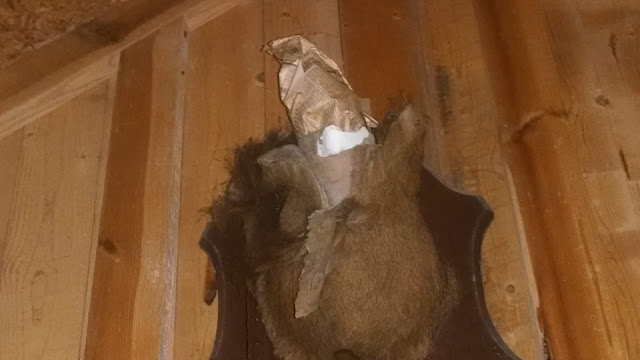 Here's the neck. Hick says his deer head was mounted in 1962. Because he looked at the newspaper stuffed inside, and that was the date. So now that Hick has finished reading his pr0n romance novel, he's reading deer-neck newspapers.

Okay. Get ready. Here comes the head! Hick took it outside on the porch for the photo. 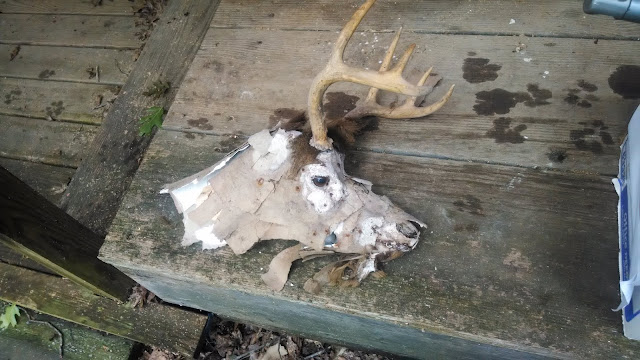 Not quite so majestic any more. I do feel sympathy for Hick. His head was attached to some good memories. He'd go down to his creekside cabin at the first cold snap (I'm sure NOT to get away from me and the boys), and start up a fire in his wood stove. He'd brew a pot of tea. Call in our old dog Grizzly, the half lab/half beagle, shaped like a large beagle, but colored like a chocolate lab. That looks like Juno's footprints by the bald deer head. She won't go inside the cabin, but Grizzly liked to sleep in the warmth of the wood stove while Hick read his romance novel.

I don't know if Hick will want another head.
Posted by Val at 1:04 PM