Val detests the game of grab-ice. She is doomed to play it, thanks to The Universe and Hick.

Last week or maybe before (these retirement days all run together), FRIG II had an issue with the ice maker. It made a grindy noise, and the twisty coil wouldn't turn. So I took out the ice container, and chipped away the slab that builds up under the twisty coil. That happens because sometimes FRIG II behaves, and makes regular half-moon cubes, but sometimes spits out hollow half-moon cubes with water in the middle under a thin ice lid.

Chipping out the slab ice always solves the problem. Occasionally, the two prongs that turn the twisty coil also need to be whacked with a butter knife to knock off their icy buildup. This time, when I replaced the ice tray, all I could get was crushed ice. I figured the cubes would clear themselves, and FRIG II would go back to dispensing my half moons again.
No siree, Bob!

Pushing the CUBE and CRUSH buttons on the front of FRIG II don't do anything. They make a click noise, as if the pushed button is activating itself. But still, all I can get is crushed ice. I can feel up inside the dispensing hole (NOT WHILE IT'S RUNNING), where there are two parallel blades. That's what's crushing my half moons as they try to fall into my bubba cup.

That's more than Hick the world-traveling machine genius figured out. All he said, after taking out the ice bin and looking around, was that something is keeping the control set on CRUSH, even though it seems to switch back to CUBE when you push the button.

"I think it might work on a magnet. Something fell down in there, and is keeping the magnet from moving. Maybe you can run hot water over that end in case a piece of ice is jammed in there, or it froze up."

Never mind that every time I take out the ice bin to chop the slabs on the bottom, a piece of ice stuck in the dispenser blades would most likely melt. AND, if I run hot water on it, what's to keep that water from freezing as soon as I put the bin back inside FRIG II? There's no way to take that part apart. That I can see, anyway.

Let the record show that to get ice cubes out of FRIG II, I have to REACH MY ARM INTO THE ICE BIN AND PULL IT OUT WITH CUBES IN MY FIST.

You know how that goes, right? My hand fits inside easily, but when I hold cubes in my fist, my hand is hard to get out the opening! 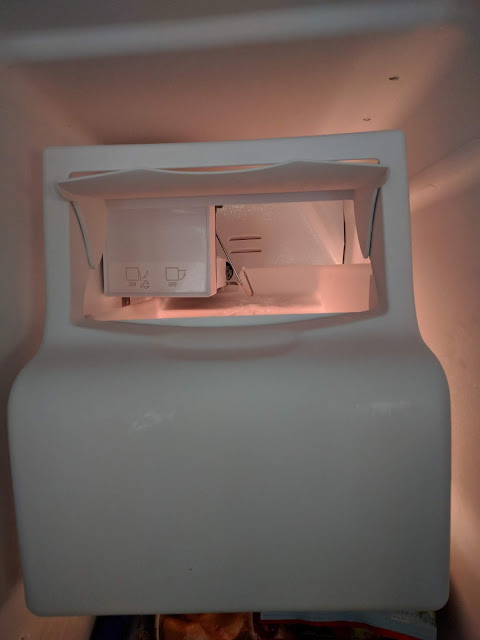 Let the record further show that it takes 13 fistfuls of FRIG II ice to fill one bubba cup. On about half of those, the little door flaps shut on my hand. On the other half, my hand hits the frame, and a cube escapes. Does it fall into the bubba cup I hold next to the bin? No. It does not. It falls to the floor, where it shatters into a minimum of four pieces, all shooting different directions like the points of a compass. Under the cutting block, under the stove, under the laundry room door, and towards the living room.

I am not happy with this seemingly eternal malfunction of FRIG II's ice dispenser. But at least I don't have a Portal to Not-Heaven like The Pony has in his apartment freezer. 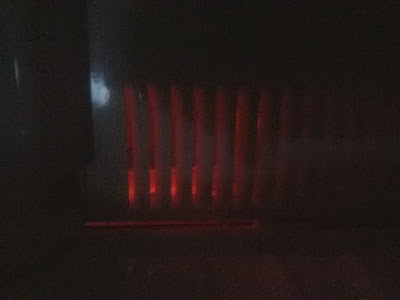