Little did I know that Hick was buying up precious metal resources to have on hand for the apopadopalyspe. Silly me. All I’ve done to prepare is try to capitalize on people’s fears and supply them with handbaskets.

Little did I know there was a method to Hick’s madness, way back in the summer when he hung some specimens on the end of the garage. I simply thought he wanted to junk up our easily-observable living areas along with his more-hidden creek-side cabin recreational areas. It’s bad enough that he nailed license plates to the BARn door as soon as the BARn was no longer just a gleam in his eye. They are not even our license plates. They're random flea market license plates. 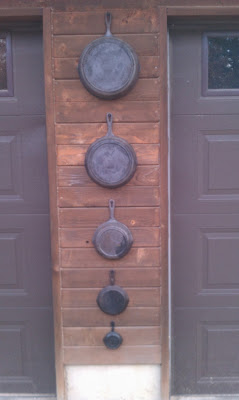 No pictures of the BARn licenses, but here are the rusty garage skillets. I kind of thought a man as worldly as Hick would understand the concept of oxidation. For a day or two, these were brand spanking new shiny black used auction skillets. I'm sure you can guess which one is the newest. Oh, and for any of you rockers out there...the name Rusty Garage Skillets is available for your garage band. I'm perfectly content with Other Dogs' Anuses.

So now Hick tells me that the other night at the auction, cast iron skillets were selling for $8.00 apiece. Which is a steal, according to him. Even though he paid around $2.00 or $2.50 for most of his. He further tells me that he has over 200 cast iron items. Huh. The wife is always the last to know.

Hick declared that if anything ever happens to him, I should not regard his cast iron collection as junk, but as a valuable commodity worth several thousand dollars. I suppose if anything happens to him as a result of the apopadopalyspe, it won’t matter anyway. Because the same something would most likely happen to me. And if it didn’t, then I would most likely need those cast iron implements to whack intruding marauders trying to steal cast iron in the back of the head.

I really don’t want to travel around to auctions, selling people cast iron skillets in which to fry their Auction Meat.