He found his treasure at Goodwill. Hick is a collector of all things Coca Cola. Or nearly Coca Cola. This one is not associated with the brand, but it IS in Coca Cola colors, and will fit in with his BARn loft decor, and might possible fool somebody who's not a Coca Cola collector into thinking it belongs. 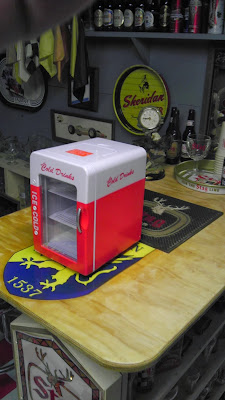 Okay. So it doesn't fit in so much with the decor of the BAR part of the BARn. It fits in with the Coke booth on the opposite side of the loft. However, Hick chose to plop it on top of the family crest on the BAR proper, probably to show off as much of his junk treasure as humanly possible. I will admit that he sent me a picture from a slightly different angle, which I deleted because it showed that last inappropriate item that he bought himself. The one that The Pony called a "drink dispenser." For a moment I did not recognize it in the background. I glanced, and assumed it to be one of those old-timey stand-up telephones with the tall body and cone-shaped earpiece on a wire. Thank goodness my background as a teacher makes me suspiciously attentive to detail.

At the rate Hick is raking in mini-fridges, free showers, drink dispensers, and cast-iron skillets of all sizes, it won't be long until his various outbuildings are completely furnished and suitable for forming our own enclave. Maybe I should sell space. Like those preppers with the missile silo divided into apartments.

I think it would be an appropriate sideline at the outlet store for my proposed handbasket factory.