They Sure Don't Rattle Chains Like They Used To

In the fall, a young man's fancy lightly turns to thoughts of HORROR!

Or jumps to conclusions, perhaps. Logical conclusions for him, based on the level of paranormal activity which seems to manifest itself in his family home.

We're a week into October, you know. Sluicing down the end-of-summer Winter Olympic bobsled run at breakneck speed, hurtling toward Halloween. It seems like only yesterday The Pony was still in middle school, insisting that the gory sheet ghost hanging a block away from his building was the Annual Autumn Ketchup Tablecloth Yard Ornament. The Pony sometimes can't see the forest for the trees. Or the ghost for the tablecloth.

We leave home during the early morning hours, before the sun has risen. Depending on fog and cloud cover, we move half-blind to the garage. It's dark in there, you know. Dark, until I hit the garage door opener mounted just inside the walk-in door, the little thingy that looks like an upright rectangular doorbell button to normal people. That turns on an overhead light that's not too bright. Kind of like the guy who installed it, at select moments.

This morning, The Pony took a bag of trash over to the dumpster. Juno followed him, forsaking a chance for me to chew on her rubbery black nose before leaving for work. As The Pony came back to the sidewalk, to step inside the door I had just opened, Juno gamboled up the steps and ran to a side-porch position for a mini-lovefest. I paused to hug her, keeping my lips firmly together. That's when I heard it.

I stepped into the gloomy two-car vehicle sanctuary. Hick had left for work 40 minutes earlier. There was his empty space next to my T-Hoe. The Pony was gaping at the area just in front of where Hick parks. By the shelves of hoarded Hick-stuff.

"For a minute, I thought that was a ghost!" 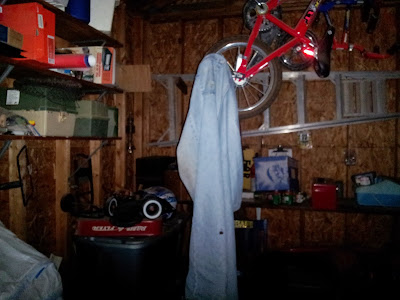 I'm sure you can understand his perception. Look at that. I can even see a long nose and two eyes. In truth, that is a pair of Hick's jeans. Yes. Out here in Backroads, it is not uncommon for a man to take off his pants and walk around the porch in his tighty-whities. Just one of the perks of living in the middle of nowhere, where people stuff bodies in septic tanks, and leave unrequested bags of hedgeapples on porches.

Before Hick left for his bowling league this evening, I showed him this picture I made The Pony snap with a flash on his phone camera. "Look at what your son was exposed to this morning in the garage."

"Ha. You mean my pants? They were all smoky from the bonfire. Huh. That looks like a ghost. You should put that on your thing and scare people."

Oh, I don't need Hick's advice on how to scare people. The true horror is the thought of Hick on the loose in his tighty-whities.