Yep. Trying to Kill Me. Pretty Sure.

Hick, Hick, Hick. The busiest attempting-murderer in the history of attempted murder. I'm pretty sure he's trying to kill me again. Here I sit on Wednesday afternoon. The sleet is bouncing off the porch rails. And Hick and SilverRedO are cooling their heels and tires (at 20 degrees) during a Winter Storm Watch, at Mick the Mechanic's shop.
Tuesday evening, Hick said SilverRedO was out of the paint shop, and getting his bumper put back on. So not ready for pickup yet. Wednesday morning, I offered to drop Hick off there as I went to town later. Hick said that due to the impending snowstorm, he would not get SilverRedO until Thursday. He didn't want to be out in the storm. He had plans to work on Pony House, then beat the weather home, picking up Chinese on the way.
"I should be leaving a little after 1:00. It's not supposed to get bad until 2:00."
I don't know how he thought he'd get SilverRedO on Thursday, in the midst of the storm. But that was his plan. "I can go by myself, and park the Acadia up at the lockers. It'll be in the fenced area, safe. Mick can pick me up there and bring me back to his shop." Indeed. It's only about a half-mile or less from Mick's to the Storage Unit Store.
Anyhoo... I went to town at noon, and was home by 1:00. Hick said he was getting ready to leave Pony House. He showed up at 2:00 with the Chinese.
"My truck is ready. You can take me to town for it, Pony."
"How do you know it's ready? Did you call?"
"No. It's sitting outside. It's ready."
"I want to eat my food while it's hot."
"Okay. We'll eat, and then you can take me."
"I can take you now. Before we eat. Then it will be done."
"Okay."
"I'm not even putting on my town clothes. I'll go like this."
We left at 2:05. As I neared Mick's to drop Hick off, I said,
"Do you have the key? Should I wait while you go in?"
"I have the key, Val. Besides, Mick has a key to work on it. I'll be fine. It's ready. Just pull in here, and you can make a big U-turn to get out."
So I did. On the way home, by the low-water bridge, freezing rain hit T-Hoe's windshield. The wipers decided to automatically turn on. They do that. They only scraped across the frozen raindrops. By then I was coming down Mailbox Row Hill. That freezing rain turned to sleet. I was home at 2:25. I sent Hick a text.
"Sleet started."
Didn't hear anything back until 2:38.
"Be home in a bit they have to finish one thing."
"Too bad you didn't check first. Don't wreck it again."
2:55 "Done yet?" No answer. 3:11 "Still there?"
"Yes waiting on parts store to bring part"
"This is terrible. I guess you'll check next time."
"Yes sorry"
"What if they can't bring it?"
"I'll get him to bring me home."
At 3:26 I called Hick. "Still waiting on the part?"
"Yes."
"It will take another hour once they get it."
"No. It will take 20 minutes."
"Will you text me when the part gets there?"
"Yes."
"This is causing me a lot of stress. I don't need this right now."
"Val. There's nothing you can do. Don't worry. I'll be fine."
It is now 4:00. No text. Here is the view outside: 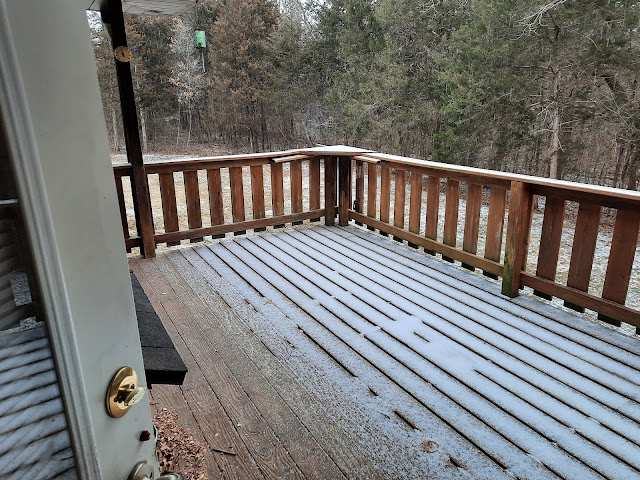