Last Saturday was not a good day for me. We'd just returned from Oklahoma on Friday night, and I had to do some grocery shopping. I got off to a late start. The weather clouded up after I left home. Hick was at his Storage Unit Store, unavailable for grocery carry-in duty. While I was in the middle of Walmart (having forgotten my glasses in T-Hoe), looking for items that were depleted, like my favorite Chicken Bacon Ranch pinwheels for lunches...The Pony started texting me massive blocks of...um...text...about a scary dream that he'd been wanting to share with me. He's like Hick. He can see through the phone, and choose the most inopportune time to contact me.

I let him know that I might not be responding right away. "I'm in Walmart without my glasses. Respond later." Still, I could hear those messages chiming into my phone. When I got back to the car, and had loaded the rain-soaked grocery bags into T-Hoe's rear, I sent The Pony another text.

"Can I call when I get out on the road? Or are you busy?"

It would be so much easier just to talk to him, rather than type two-fingered on that tiny phone keyboard. And I could be on my way home at the same time. It was NOT convenient for The Pony.

"I'd rather you not call. Canker sore that makes talking hurt." [DON'T JUDGE!]

"Is it really because you're staggering day-drunk? Heh, heh."

Not that I expected that of The Pony. Genius, yes. But The Pony hasn't developed a taste for alcohol. I went on towards home, making my final stop at The Gas Station Chicken Store for my 44 oz Diet Coke.

"Leaving for home with my soda. Soaked like when we ran in Steak N Shake on our visit out there. It will take forever to get home and get these groceries put away. Later, I'll text you."

"Rain all morning. About half as hard as on the trip to get Dad's TIP. I hope I can get over the creeks."

I did make it over the creeks, the big one just coming up to pavement level, and the little one already gone over and receded. I pulled into the garage. Sighed heavily. And took an armload of grocery bags to the side porch. Of course I had to dole out some cat kibble to the dogs. They're usually good when I set down the groceries, but I never completely trust Copper Jack. He might start foraging in my bags, or just pee on them to show me who's boss. He hasn't. But he might. I always bring the bags to the side porch, then get my purse and soda and mail to carry up the steps to unlock the door. Then I can make several trips out to bring those bags into the kitchen. It saves me some trips up and down the porch steps.

I went back to T-Hoe's rear for more bags. I had four looped over my right arm, and two in my left hand, when it happened. 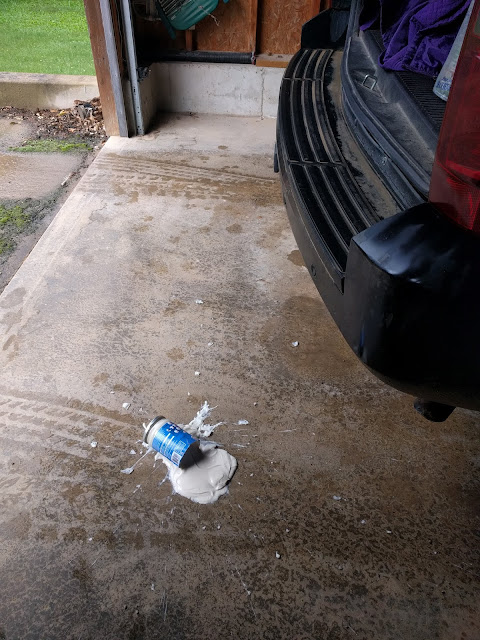 "This is when I cry." I sent The Pony a text after the fact. And after the cleanup. No, that's not spilt milk. 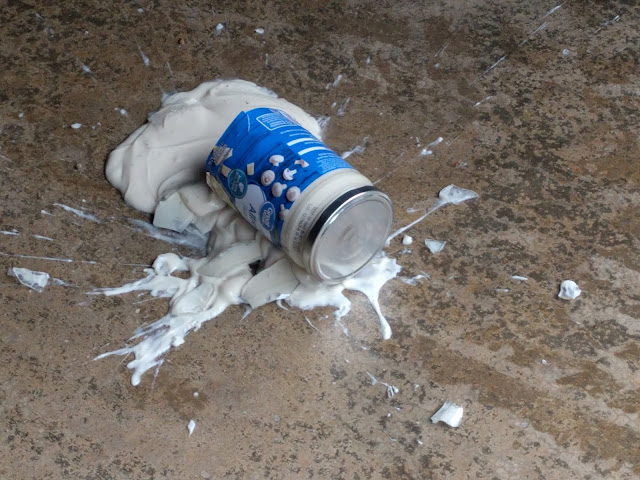 It's spilt Alfredo Sauce. The checker had put TWO jars of it in one bag, along with a double-can pack of white meat chicken. She did not double-bag. The whole bottom of that bag ripped open while it was on my forearm. I was overwhelmed. After such a taxing morning, soaking wet from the rain, I now had a crisis on my hands.

I needed to get all those groceries inside the house, so the dogs didn't think they were a treat. But every moment I was out of sight of that Alfredo, the dogs might be licking it and ingesting broken glass.

I put the other bags on the porch beside the first set. The dogs had scattered, so I didn't know exactly where they were. Jack goes in the garage to look for the cats who occasionally get in there. He gets under A-Cad and I can't see him. I didn't want to close him in with the Alfredo glass. I got the keys out of my purse, and took a couple of the lighter bags over my arm as I unlocked the kitchen door. I grabbed the broom and dustpan from the laundry room, a Walmart sack and two paper plates for scooping glass, and hurried back out. Jack and Copper Jack were milling around the groceries, looking disinterested.

Did you know that Alfredo Sauce is virtually unsweepable? It's true. I ended up scooping it with the two plates, jar and all, into the Walmart bag. The remaining Alfredo did not go onto the dustpan well at all, making a kind of paste that hindered the sweeping of the glass. So I picked it up by hand, while stepping around T-Hoe to look at those groceries and dogs. I got every piece of glass I could see, under T-Hoe and outside the garage. I tapped the broom bristles in a puddle, to try and clean up the Alfredo so the dogs wouldn't want to lick the concrete. Oh, and in the middle of this whole process...I felt a little...um...indisposed...and had to run into the house (grabbing a couple more bags that I could juggle with the broken jar bag) and into the bathroom.

The dogs behaved themselves, and I finally got the mess cleaned up and the groceries inside. Of course I had to be extra careful with the bag containing my big jar of olives and a large can of mushroom pieces and stems and three bags of egg noodles. 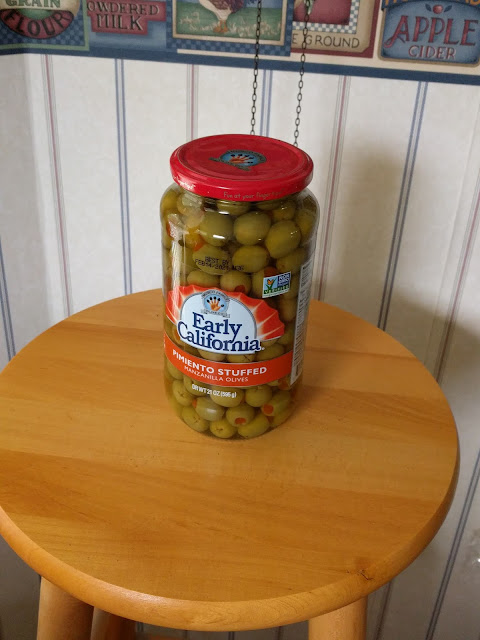 Can you imagine the world of hurt I would have been in if my OLIVES fell on the concrete and broke? That would be a lot of bending to pick them up by hand.

It took 40 minutes to get my groceries in and put away. I was dripping with sweat on top of the rain water. I finally got to text The Pony about his dream.

But I DID still have a spare jar of Alfredo Sauce for my planned culinary experiment. It had to wait a week, though. I might share it with you.