Let the record show that Val is not a happy camper. Not much of a camper at all, except when she's forced to rough it. Like now, at 8:47 p.m. Thursday night. No power. No computer. No internet. No lights. No water. No working toilets. No TV. No books. Just candles, pen (free from the counter of my credit union), and a mini notebook.

A storm rolled through around 6:30. I was happily typing a letter to The Pony on New Delly in my dark basement lair. The power flickered 3 times. New Delly ran repairs to restart himself. My Word! It recovered my untitled Pony letter document! No sooner had I typed ONE SENTENCE about the power going off 3 times, and put in the period...when the power went off AGAIN! Heh, heh. "Make that 4 times," I was going to say, like the true wag that I am. NO. Make that 7 times.

Yes, the power again did the on/off thing. No sooner would New Delly start running that black screen with the countdown to restart after an improper shutdown...than he would be improperly shut down again. I was powerless (heh, heh, isn't THAT ironic) to shut him down. Because first I had to wait for New Delly to come back on. Which he couldn't, because he kept being improperly shut down. He's on a surge suppressor. But I don't think all that improper shutting down was good for his health. 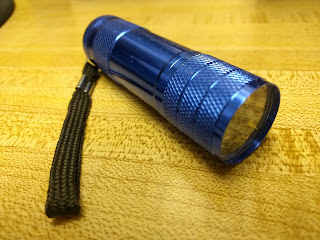 I grabbed my little flashlight that I keep at my left elbow in a pile of music CDs and Germ-X and paperclips in an upside-down light bulb holder. That got me out of the lair and up the stairs to the main living area. The rain was pouring down outside, but at least I had a bit of natural light.

I passed the time by having a not-tasty supper of a cold cheese sandwich, an individual can of Beanie Weenies, with an individual mini ice cream for dessert. And water that I could still get out of the faucet. The well doesn't work with no electricity, you know. I had one flush each from each of our 3 toilets..

Of course I tried to report my power outage to the electric company. That means I had to use my cell phone, because the house phone doesn't work without electricity. Seems like the old rotary phones used to, but not my cordless Panasonics. I had to use my flashlight to look in the living room closet for a telephone book, a 2009 being the most recent I could find. Since my Sprint doesn't work well in the house, and rain was sluicing down outside on the porch, I had a tenuous connection at best.

It took me 3 tries to punch in all my information and find out that my outage had been reported, 54 households were without electricity, a crew had been assigned, and no time of restoration was available. There was a major delay when I had to end the first call, and take my flashlight to look for an old electric bill showing the account number, since the automated system refused to recognize any of the 4 possible telephone numbers I could have used to link to my account.

I had the bright idea of driving to the end of the driveway to set the trash dumpster upright again, since I didn't want marauding critters or the Crazy Rottweiler or Killer Poodle to rip open the bags before the trash truck came at the crack of dawn Friday morning. Just one problem. T-Hoe was in the garage. Trapped by a door that doesn't open without electricity. Oh, there's a pull rope, but it hangs over T-Hoe. I used to have Genius climb up to get it for us when he was still riding to school with me, on the odd day that power was out when it was time to leave for school. This old Val ain't doin' any climbin' to grab a garage door rope.

The main storm moved on, and the sun began to set. Taking away my ambient light. 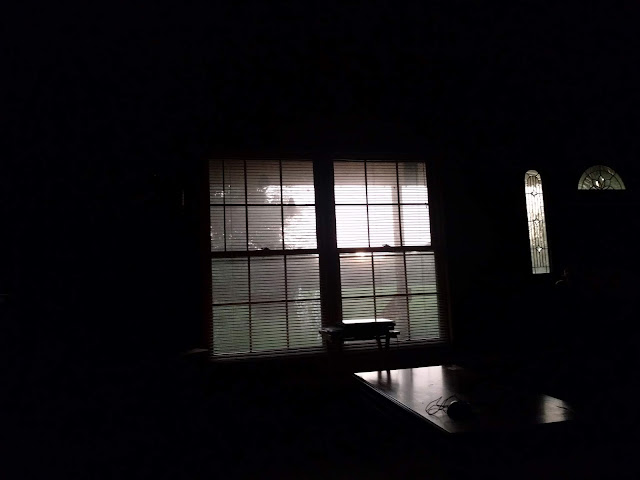 At least the sunset was pretty. 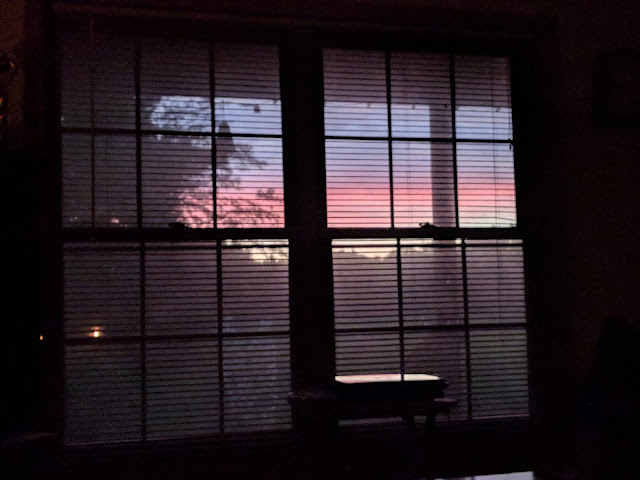 Hick was at an auction. He sent me a text to provide information he got from the local property owners' Facebook page. "There is a power line down at Buddy's old house it was on Facebook." Buddy's old house is two up from us. Just on the other side of Copper Jack's house. Funny that I'd not seen any electric company trucks go by, while I was sitting in the La-Z-Boy doing absolutely nothing.

I got out the matches and lit 3 candles, coughing often from their impurities flooding the air as they burned. I had a Cranberry, a Banana Nut Bread, and an Apple Wreath. They smelled a lot better than my supper. I was hoping they didn't heat up the house. Temps have been in the low 90s, and of course the air conditioner won't work without electricity. Nor the dryer, for my clothes that were sitting in the washer waiting for it. 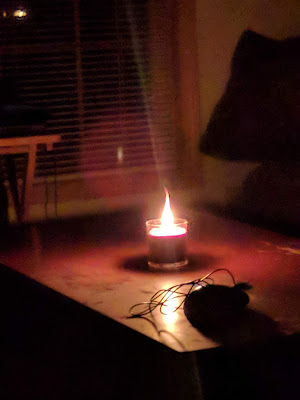 At 8:15, I heard gunshots. Either The Purge was starting, or a lot of my neighbors threw in the towel and gave up the ghost. Lots of shots. Big booms. Like maybe a gun that could bring down an elephant. I guess people have to find a way to entertain themselves. I had the bright idea to write up a blog post in my little notebook. It was kind of hard with the flickering candle, it being in just the wrong position, and casting a shadow on the portion of the page where I tried to write. 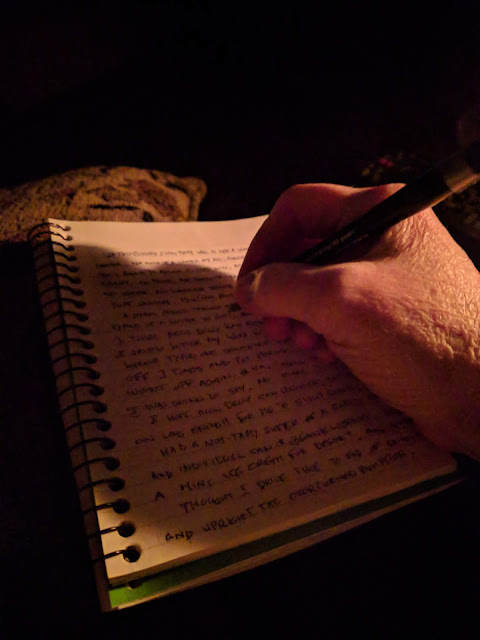 At 8:45, I saw a power truck go by. At 8:55 it went back towards town. Further efforts to find a restore time (which necessitated a return flashlight trip to the kitchen to look up the account number again) did not give me any new information.

Too bad Hick had been at the auction. Too bad for me! Great for him. He didn't even have to experience the outage. If he'd been home, he would have hooked up the generator, to at least give me my New Delly and my TV and a light. 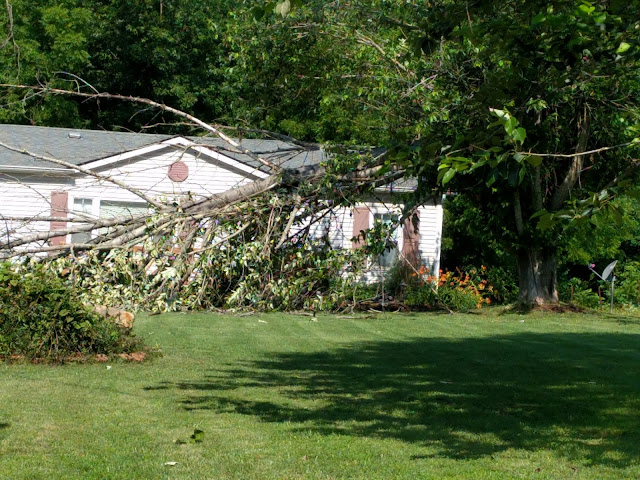 The next morning, I saw that our down-the-hill neighbor had experienced a tree malfunction. At least their limb didn't land on the power line. Or their house, of course.

Let the record further show that our electricity went off AGAIN tonight. At 4:45 p.m. Right when I was going upstairs to make Hick's supper before he left for the auction. The only good thing about a power outage at that time is NO COOKING FOR VAL. Hick said he'd get something at the auction. Hopefully not Auction Meat. But more like a hot dog.

Hick called me on his way out of our compound. Over on the hill by HOS's (Hick's Oldest Son) house, a limb had fallen on a power line. Hick knows the local guy who works for the electric company. He stopped to talk, and found out the guy had reported the outage, and called for a crew. You never know how long that's going to take. And neither did the electric company's automated line that gives estimates for a restoration time, after you look up your account number and call them.

This time, it was back on by 6:07 p.m. And Hick had opened up the garage door, in case I wanted to escape in T-Hoe.