The Next Best Thing to Having Cents

Sorry, people! I tried! Tried to find pennies this week for the Saturday Centsus. The best I could do was a blue spot I noticed as I went into Casey's on Friday morning. Not a coin. Gum. I figured that out, because when I came back to T-Hoe, I was checking a text from Hick, and I stepped on it. The aftermath was not pretty, though it WAS colorful. Smelled like spearmint. 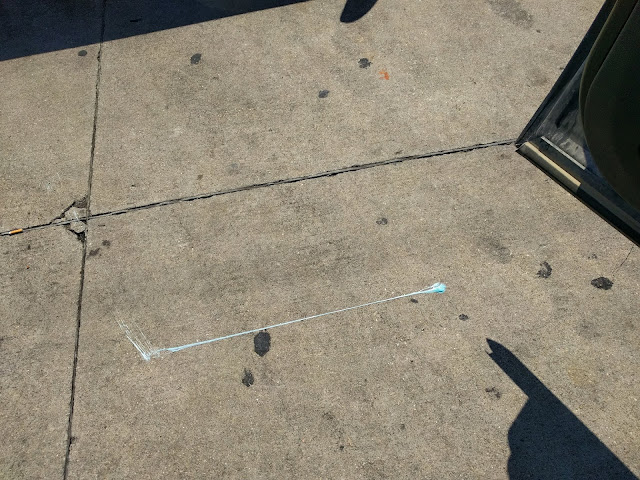 Maybe I was trying too hard. Sometimes, you just have to let go. The pennies will find you.

I don't know how much more let-go I can get than slumbering like the non-living. As you well know, I go to bed around 3:00 a.m. Sometimes later! I sleep deeply for about two hours, then nature calls. It's still dark when I get up (the first time). I don't turn on a light. There's a faint glow through the frosted french door louvers. Those doors face out toward Poolio's solar light, on the deck down below porch level. There's also a slight illumination from the living room, due to the kitchen undercabinet lights we've left on since the boys were still young 'uns. So it's not like I'm stubbing my toe.

Wednesday night (technically early Thursday morning), I'd been dreaming about a trip with my cousin who bought my mom's house. Dream-Us had gone to a charity function by car and by prop plane. Dream-Cuz was driving us back to the airport in a snowstorm when my mom drove up in a sedan. We put her in our back seat, and she said she'd just driven two hours (?) to make sure we got home safely. Dream-Cars were sliding off the road, and Dream-Cuz carefully went around them. We both commented that somebody had just stopped to help those people. The third Dream-Wreck we passed had people strewn a distance down the snowy road. Our car started to slide backwards, but Dream-Cuz got it under control and slowly crept up an incline. Dream-Mom had a conniption. "Go back! You have to go back!" She was quite adamant that we return to help those people. Dream-Us did not. Dream-Cuz went to the airport, and he and I got onto that little plane to return home. Dream-Mom did not accompany us.

It's just a dream, you see. Who knows what our minds are up to while we're sleeping? There were a couple of details in it that were in news stories I'd read before bed. About all I could gather from that dream was that apparently, even in my dreams, I don't really care about helping people. I was still thinking about that as I dark-walked back across the bedroom to the foot of the bed, on the way to my side by the french doors.

I normally fix my gaze on Poolio's solar light through the frosted french door louvers, and navigate my way back, following it like the North Star. This time, a glint on the floor caught my eye. 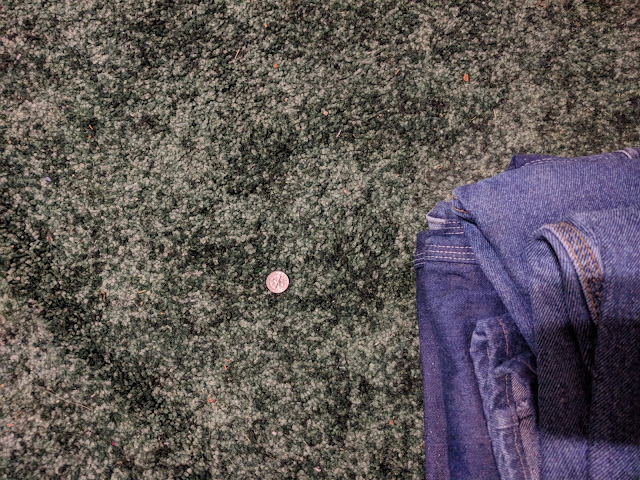 I have recreated the incident during evening hours, with the light on, to get this picture. Seems that Hick had done his laundry, and stacked a pile of overalls and jeans on the floor without putting them away.

Let the record show that I picked up my rightful dime, and laid it on the mantel of the fake electric fireplace on the wall by my side of the bed. In full daylight, I saw that it had been face down. I don't associate finding dimes with my mom. More with my dad, seeing as how we found them all over the house in the months right after he died.

I'm sure this one got away from Hick when he put his change on the dresser over by the bathroom door. I don't know why it couldn't have been a penny! He puts those in a giant red plastic Coke bottle bank. He does it with the lights on, though. Several hours before he goes to bed, because he likes to lounge around in his tighty-whities in the La-Z-Boy. So he had several opportunities to spy that dime and re-claim it, between unloading his pockets, trips to the bathroom, and walking from bathroom to bed.