Jeepers, Peepers! You're a Bunch of BLEEPERS!

The post office is running a new scam. Uh huh. Those dead-mouse sniffers are up to no good! And I'm not just talking about their rate cut on a first class stamp that took effect April 10th!

Speaking of that first price drop in postage stamps in 97 years...Genius has mailed me two letters since he went off to college three years ago. I KNOW! I'm so very lucky! He bought himself a typewriter, wanting to take a walk on the retro side, and has typed me two letters. However...he went to the post office on lunch from his current job at an engineering firm in the city. He intended to simply pay postage to mail my letter, because he had left his stamps at home. He doesn't need many stamps, being an online bill-payer in the manner of today's techie young whippersnappers, and buys his stamps online too. BUT the post office window was closed, and all he could do was buy stamps out of a machine, which only sold BOOKS of stamps, pissing him off giving him displeasure, because as he said, "I'll NEVER use that many stamps!" So much for my hopes of more loving letters from the sweaty fingertips of my first-born son.

Anyhoo...Genius paid 49 cents apiece for those Forever Stamps. And now they're only worth 47 cents apiece! So much for using U.S. Postal Stamps as an investment.

No, it's not the rate drop that's the new scam. It's identity peeking. That's right. I said it. The USPS, at least in Backroads, appears to have a problem with peepers. Here are two envelopes I received the same day: 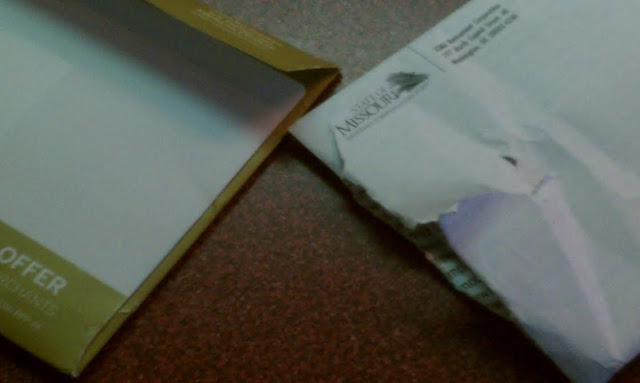 Of course I had to cut off the name and address part. What good is an anonymous blog if you go flashing your tracking bits all over the innernets?

The one on the left was for Genius. It was a credit card application. All he had to do was call and activate it. I'm hoping the seal just had faulty glue (and somewhere a licker has expired and released her impending groom from impending doom), and popped open when being wrestled into the not-gaping-enough round green maw of EmBee.

The second one was for Val herself, a statement from the MOSERS folks about her benefits from the five years she worked for the unemployment office. Funny how the end was ripped enough to slip those folded papers out for a peek, then slip them back.

You know how Val wants to believe the best of everybody. How she shies away from conspiracy theories. NOT ANY MORE, BABY! Something is up.

And that had better not be the balance on credit cards using my family's vital statistics!