Blog buddy Sioux is hosting Back-of-the-Book-Blurb Friday. I have 150 words to entice you to buy my fake book. C'mon pardners! Pony up a $50 gold piece and fake buy my fake book! I'll give you change. Promise! Of course, that change may be in guineas. Hick is a world traveler, you know. Oh, who am I kidding? You KNOW that any change I give in guineas will be actual guineas. The feathered variety. Heh, heh! I don't give a farthing if you complain once I hand you those screeching unpleasant fowl. It's a done deal. Let the fake buyer beware! 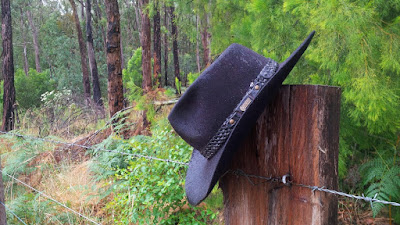 
Catastrophe Wayne was in trouble. He had taken off his thinking cap for only a minute, and now he was lost. Where WAS that darn hat? He'd had no choice, really, what with that bee in his bonnet. Those hombres at the poker table had been right. Catastrophe Wayne WAS keeping something under his hat. But it had nothing to do with poker, and everything to do with stinger.

CW stumbled through the forest, thumping his nose on first an oak, then a cedar. That his flailing arms windmilled perilously past his well-hung chapeau no less than seven times was perhaps the unkindest barb of all. Well...after the end of that stinger, still sticking out of CW's bare scalp.

Will a sudden downpour decrease the swelling and allow Catastrophe Wayne to see again? Or will an attractive stranger riding the fence line appear with an EpiPen? (147 words)

Abe Lincoln, from under his stovepipe hat…”I honestly don't get the appeal of Thevictorian's fake book. The world will little note, nor long remember, what I say here. But it will never forget what she's done here. I'd sooner go see a play than read this tome by firelight.”

Charlie Chaplin, holding up title cards…”This fake book by Val Thevictorian does not bowl me over. It is not even suitable for a tramp to stuff into his clothing for warmth.”

Amelia Earhart, lowering her ear flaps…”Val Thevictorian's fake book makes me wish I could fly away and never hear of it again.”

The Mad Hatter…”Val Thevictorian has a regrettably large head. I very much love to hate it, as well as her fake book, which is nothing but jabberwocky."

The Captain, without Tennille…”I never want Val to do that to me one more time! Muskrat Suzie and Muskrat Sam both agree: they have no love for this fake book.”