Friday evening we had Puppy Jack out on the porch. The Pony wanted a new picture of him to text to various girls. So he squatted down on his heels and tried to get Jack into the frame. Puppy Jack had other ideas. He's an inquisitive sort. As The Pony held the phone ready, Jack rushed up and sniffed it. His little puppy nose hit the camera button, and he TOOK A SELFIE! Much to his own surprise. 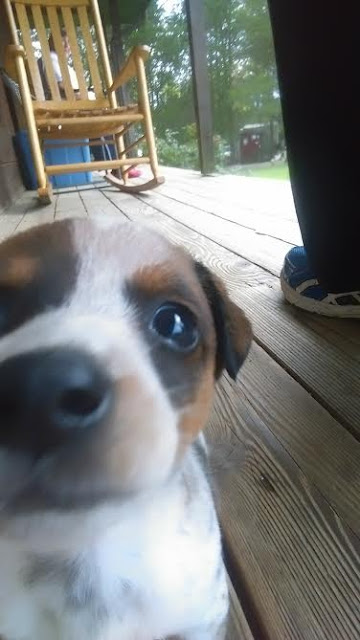 Not a flattering angle for you, Jack. And no fair including Val in the background, behind the prison bars of Baby Genius's rocking chair, now relegated to the front porch and the elements by Hick. Yep. Them's Val's red Crocs. And the chicken house in the distance, where no chicken deigns to sleep.

Perhaps Puppy Jack's expression is due to the disturbing news he overheard from Val.
HICK IS RETURNING TONIGHT!

Yeah. Hick is no longer across the pond, allowing Val and The Pony carte blanche with Puppy Jack's nighttime whereabouts. So it's off to the hutch for our dear puppy. He can handle it, though. He's much more self-assured than when he arrived. He doesn't even want to be held! He wants to gallop with his little bowed back legs along the porch boards, sounding like a herd of...well...bow-legged puppies on stampede.

One more week, and we hope to let Puppy Jack roam. Depends on his step-ascending, and more importantly descending abilities. He'll still have to be put up for a couple more weeks while we're at school. Can't have him running after Juno, and then getting pupnapped by a neighbor.