When It Flames, It Roars

Val is never really safe in her dark basement lair. All manner of calamities could befall her at any given moment. Which might, perhaps, explain the unevenness of her blogging efforts. There she'll be, with the most scathingly brilliant idea (take my word for it), her fingers poised to dance across the keyboard, when the phone rings. It's Hick.

"The woods are on fire."

"Up by the other land. Across the road from the boys' land. It's coming up behind the house. I called the fire department. Not 9-1-1. I called 3-1-3-1. The same number I called when I ran over the old lady with the city truck. That's the central dispatch office. I said, 'I have a fire tag. The woods are on fire.' And they took my name, and came out."

"How did YOU discover it?"

"I'd been smelling smoke all morning. Then I took the tractor down to the low water bridge for that sand for the sidewalk. And I still smelled it when I got back. Good thing I drove up here to take a look. It was on my buddy's property. I seen he had a couple of camper shells back there, so I called. I was standing out front talking to the fire chief. I know him. And we heard a big WHOOSH and a ROAR. 'Probly them propane tanks,' I told him. And he said, 'Uh huh. There's probly more.' Just then another one exploded. That ROAR sounded like a jet engine!"

"No. But I wanted to make sure it didn't get the cabin. It's headed that way. I can see it up on top of the hill."

"No. The smoke. I don't want it to get to them cedars. Then the whole place would go up. That's why I called the fire department. We have a tag for both properties."

"They won't charge who called. They'll charge whose land it's on. Did that crazy guy with the sticks in the road start it?"

[Let the record show that bad blood between neighbors can start in a heartbeat if one calls the fire department and the other has not bought a fire tag for the year. Because then he'll be charged the actual cost of fighting the fire.]

"You get up here to the house. You'll burn up!"

"Val. I did this for five years. I'm across the creek."

"Fire can jump a creek. All it has to do is blow an ember on the wind. And that's the direction you say it's headed, if what you say is true."

"Them guys have their trucks."

"No. They have their blowers. They blew the leaves back and then burned it back."

"How long ago was this?"

Let the record show that the last thing a cedar house dweller wants to hear is that the woods are on fire, and the flames are headed in her direction.

Pics or it didn't happen: 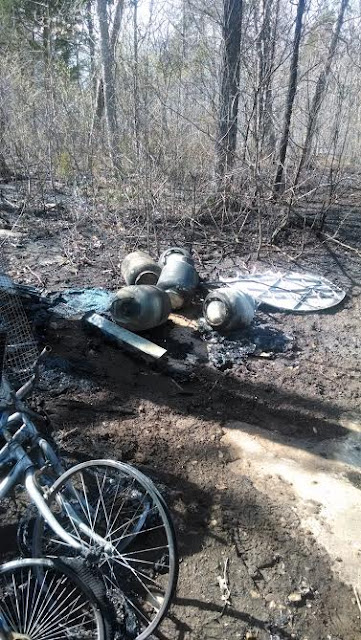 "The propane tanks that burned up at the fire." Nothing in the subject line. Just an email from Hick, aficionado of propane tanks, it seems. I'm more interested in the wheelchair or bicycle in the foreground.

I guess those tires didn't make a WHOOSH and a ROAR.