Take a gander at THIS: 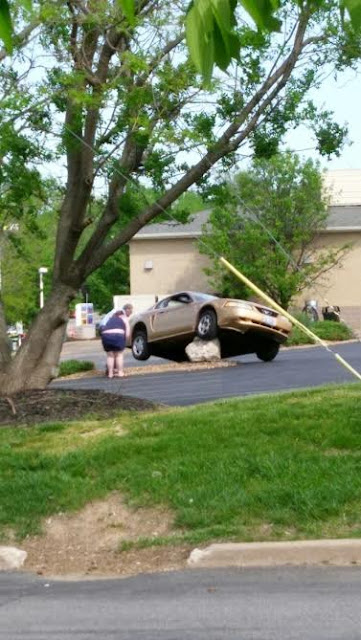 Coming back from picking up The Pony's special award (STILL not a leg lamp) on Sunday, we had to meet Hick's oldest son at Bass Pro Shop in St. Charles. It is perilously close to Ameristar Casino, you know. But with The Pony along for the ride, Val stayed out of that gambling den.

Anyhoo...we made our left turn into the plaza with Bass Pro, and passed this car on a rock. I saw it as we went by, and commanded The Pony to take a picture. But he would not! "That's HER business. Not yours." Well. Pity he didn't tell the 15 people running toward her from the Bass Pro parking lot.

Hick's Oldest Son, hereafter known as HOS, was waiting on the lot with Hick's car (my mom's Trailblazer) so Hick could take it to the airport for his trip to France. "Fine, Pony. I'll have HOS get me a picture." And he did. Two, in fact.

"I was standing here on the lot. I stepped out to smoke a cigarette, and heard a crash. Then I saw it. I don't know how she did it. Probably texting." He went and took my pictures.

Thing is, when I saw it, I immediately thought it was staged. Like a car dealer was having a special sale. It's like when they drive a car up on a ramp to attract attention, right? To catch your eye. Make you want to look at cars. But no. This was the real thing. You should have seen the army of men headed over there. Unfortunately, I think the younger ones only wanted a picture. The older ones, dad types, wanted to help. One guy passed Hick and said, "I bet a bunch of us all together could lift that car up and set it down off the rock." Probably. But you just don't know these days. There might be a lawsuit if somebody got a hernia.

Here's another picture. When a dad type first arrived on the scene. 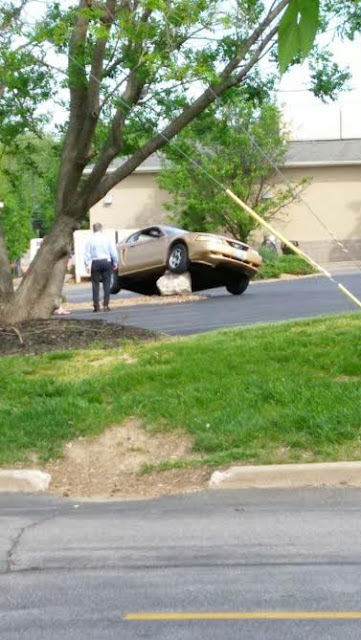 The entrance to that area is to the left, right behind the car. Just a short little drive, with an innocent rock sitting off the pavement.

Life is stranger than fiction.