The Literal Meaning of "Cute as a Speckled Pup"

In case you missed the major announcement yesterday...OUR PUPPY IS HERE!

Sure, he's a free pup from an "accident" between a blue heeler and a dachshund. But he's a PUPPY, by cracky! And he's OURS. He's still a little young to leave the nest, but his mother had issues feeding the seven hungry mouths, and they had to be put on canned puppy food. You know what? WE can buy canned puppy food! So now Jack is home. That's his name, you see. Jack. Just Jack.

Hick's oldest son, HOS, brought him to us Monday evening. He was going to bring him Sunday, but we had just gotten back from our weekend trip to Columbia, and HOS had driven Hick's car to the city so he could park at the airport for his France trip, and HOS's wife called on the ride back, and you know Val! I didn't want to cause any problems, so I said it was fine to bring the pup later in the week.

WELL! Come to find out, Hick had told HOS that I really wanted that pup NOW. I guess to replace Hick while he's gone to France. When in reality, it would have been easier to get the pup when Hick was back. Because we spent 90 minutes trying to get his little pup hotel all set up. Can't leave him running around the porch. He might fall off, and it's a long way down.

Hick had said to put him in the rabbit hutch where we kept puppy Juno, and to fill the chicken-watering can so he couldn't tip it over. WELL! Come to find out, both of Hick's chicken-watering cans had holes rusted through them. AND Hick had left old hay in the house part of the hutch, which was full of ants. SO...The Pony and HOS got it cleaned out, put a fresh bed of cedar chips in the house, sprayed the legs with Black Flag so no more ants would crawl up, and put a round flat casserole pan of water inside on the chicken-wire floor. VOILA! Instant pup hotel.

Here's a little secret. Just between you and me and The Pony and HOS. I brought puppy Jack inside the homestead for the night. He will have to spend his days outside in the hutch. He can't roam free just yet. But at night, he comes inside with us. We couldn't find either of the pet taxis, so he's in a tall storage tub with a cedar chip floor and a soft towel to sleep on. He'll be better off outside during the day, where he can watch the chickens and the mini pony and Juno.

Speaking of my sweet, sweet Juno...SHE LOVES HIM! Sure, I had a pocket full of a baggie with a sliced hot dog so she could have treats while we petted Jack. But she was more interested in Jack! When we fed him his evening meal of canned puppy food, Juno took some bites of hot dog. Just because Jack was busy standing on the front porch pew eating from a paper plate. When he whimpered, she ran to him and stared, wagging her tail.

Here they are, getting acquainted. 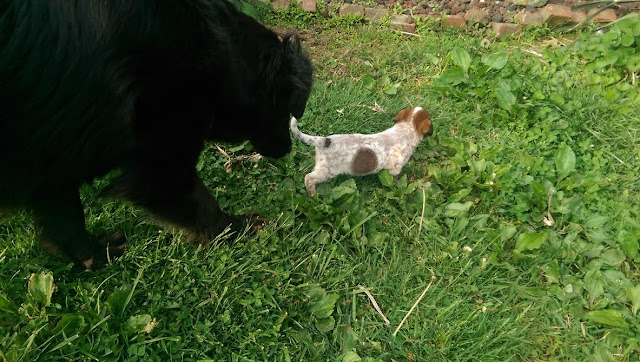 And a closeup of our new family member. 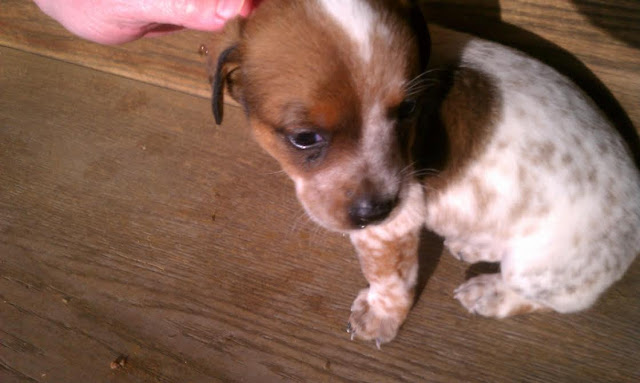 The Pony has been caring for him like an infant, setting that storage tub on his lap, then beside the couch, then taking it into the master bathroom to talk to Jack during his bath. "I just hate it when he cries!" I tried to tell him that's what pups do. He wants his caretaker, and misses all his brothers and sisters. The Pony went so far as to suggest that we take Jack to school, in his tub, and let him sit in my room. Not happening. Juno was fine in the hutch. Puppy Jack will be as well.

But at night, he can come inside. At least for 9 more days.