Last night I called Genius to give him a heads-up on his tax return.

Can you believe he doesn't know how to file by himself? Makes you feel all safe and secure thinking that he's going to be programming computers and engineering electrical systems in a few years, doesn't it? He might just be responsible for a new off-the-grid movement!

He answered on the second ring. Making me think that he really didn't have anything important going on. "Call me back on the house phone. This call is costing me money." That's because our cell phones have a prefix that is long distance from our house phone. Dang utilities will get you comin' and goin'.

"Yeah. I sent you two envelopes with your tax info. One of them is strictly for your records. It has a handwritten note in it that says, 'Save these for your records.' The other has two envelopes, one for federal, one for state. The forms are in there. All you have to do is sign and date, replace one of the W-2 copies with your original, put them back in the already addressed and stamped envelope, and mail. There is a list of step by step instructions."

"Okay. But you know I'm going to call you as soon as I get them. I am so incompetent."

"Well, next year I guess you'll have to hire someone to do your taxes. You'll have out-of-state income, you know." Let the record show that Genius has an internship with Garmin that is not in our state.

"I know. I told you. You should have stayed with the same employer." Let the record show that Val wanted to use the phrase, 'You should have danced with the one what brung ya,' but she knew Genius would say that she wasn't making sense, because he hadn't been dancing last summer, but working for $20 an hour with an electrical engineering firm.

"Maybe it's not too late! I don't even want to think about it being more complicated! I can't do it! I'll have to hire someone!"

"If that's the only issue, I might be able to do it. I'm not sure, though. You don't get all of your withholding back this year. It cost you about $59 because we could claim you as a dependent. But it saved us a couple of thousand. Not that we get a refund. We have to pay. But it's less."

"I shall expect ten percent of that savings."

"Yeah, right. You'll get ONE PERCENT, and you already got it, because I looked at your university billing statement today, and you owe $20. I was shocked. I know that sometimes we get a refund check. But most often, the amount you spend on tuition and housing and books miraculously comes out to be the same as your scholarships and RA stipend. Now we owe $20!"

"Huh. It's funny how that works out."

"WAIT! You mean that statement actually shows you what I bought?"

"Uh huh. It says, 'St. Patrick's Day Merchandise.' And in the explanation column, it says, 'SS medium.' I figured that meant a medium sweatshirt."

"Oh. Maybe I'm spending my money on a beer stein."

"Yeah, right. That would have been a large."

"Yes. And I have a sweatshirt for every year."

"Are you going to be one of those people who frame them and hang them on the walls of their ultra-modern apartment brick walls, to show off at alumni parties? I hope I don't open the online statement next month, and see that you've bought a snake-whacking stick." Let the record show that Genius attends a university that is famous for its St. Patrick's Day celebrations, devoting an entire week to the festivities.

"Yes. I will frame them. And I just might need me a snake-whacking stick. But I had no idea that statement actually shows you what I bought."

"Well, they won't take anything but cash or account. I don't carry cash. I use my debit for everything. So that bookstore stuff gets put on the account. So...is there anything else?"

"Not really. I just wanted you to know that your tax info is on the way. It will take about four weeks to get your refund, since you have to do it by mail since your identity was stolen."

"Okay. I'm done talking now. I've been flying a space ship ever since you called, but I can't beat my time while I'm talking to you." Let the record show that Genius called and asked me to sent him his old joystick last week. The one he used on his airplane-flying games when he thought he wanted to get his pilot's license.

"Oh. Exuuuuse me! I didn't know I was keeping you from fighting aliens."

"You're crazy. I'm not fighting aliens. Who said anything about aliens? I'm flying a space ship!"

"How egotistical of you , to think you're the only species in the universe flying a space ship! I hope you're nice and comfortable, wearing your new $20-sweatshirt while you fly."

"Actually, I have on my underwear and a T-shirt. I've been dressed up all day."

"All right then. I just wanted to let you know that I finished your taxes." Let the record show that Val would never come between a boy and his joystick.

So there you have it. What the college money is going for, and how Genius spends his evenings. I have a good mind to bill him for the ten dollars I spent on mailing his joystick. We provide over half of his support, you know. 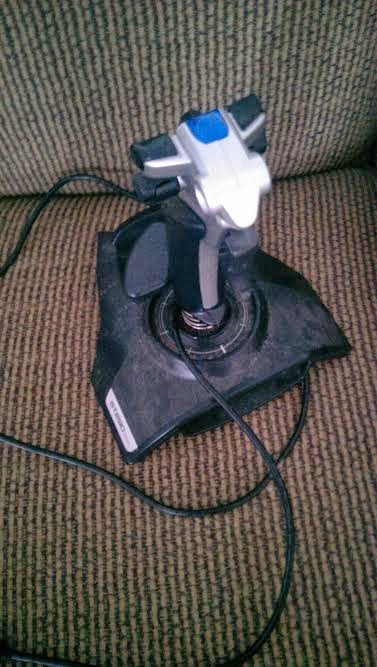