Hold Onto Your Board Shorts, Surf's Up! 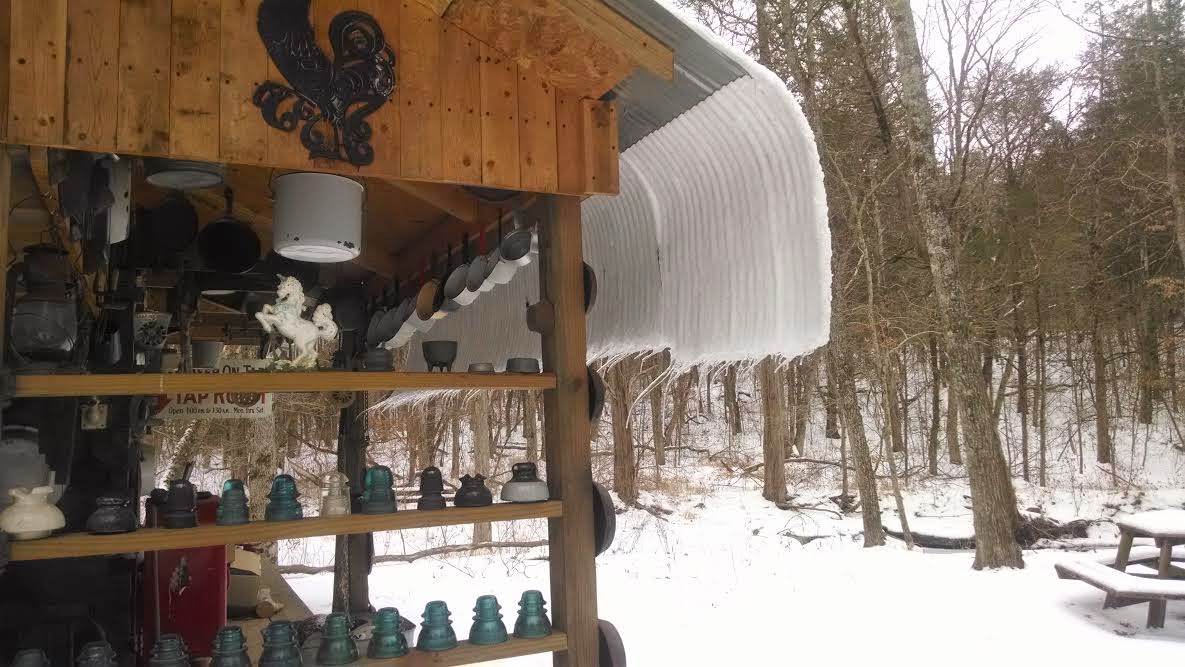 Part 3 of our 4-part series, Beer and Bro-Things in Backroadsia, brings us this view of Hick's creekside cabin facing the creek. Well, the creek WOULD be there, if it wasn't frozen over.

Here we have the other side of that giant frozen shoot-the-pipe wave that crept off the roof of the cabin. It must be the stuff surfers dream about, except not frozen, and with a whole ocean of water under it, and not in the woods with all those trees to crash into, and with some bikini girls egging them on.

The blue things are insulators off power line poles. I imagine Hick bought up a box of them at the auction, but he may have collected a few here and there from some of his electrical friends. One thing is for sure. Hick did not climb power poles to get them. He is not as agile as a mailman who spent the better part of his childhood growing up in the Pacific Northwest, able to shinny up a sapling and grab a man-fur from the branches after it was unceremoniously tossed out an apartment window.

The rest of the stuff I’m not sure about. Hick’s cabin porch is as busy as a Richard Scarry drawing. No banana car in sight, though. But he DOES have a rearing unicorn.

The hexagonal picnic table in the background has more miles on it that The Pony’s truck. Pony miles. It’s a used truck, you know. That table was bought by Hick and me right after we built the house. It used to sit over in the side yard, where the chicken pen (unused by the chickens) is now.

Yes, we had some good picnics on it when the boys were small. It was right near that picnic table where our old dog Grizzly, the boys’ first pet, found that nest of rabbits being eaten by a giant black snake. Then ate them himself once Hick rescued them from the snake. Little boys cry loud tears.

That picnic table made many a trip up the gravel road to Hick’s buddy’s house for cookouts. Don’t think it can walk. Buddy came to get it on his tractor, with a boom pole. That means he strapped that table up with chains, suspended it from a long pole off the back of his blue tractor, and drove it up the road. Then back, to return it, after several weeks of reminding.

I wouldn't be surprised if Hick built a special building just to house the picnic table.