Road House, but Without Patrick Swayze

Did you ever have one of those days, where it seems like everybody's gettin' on your case? From your teacher all the way down to your best girlfriend? Well, technically, that was Brownsville Station. But I kind of had one of those days, myself. Good thing I'm not a smoker. Or a hanger-outer in boys' rooms.

It all started innocently enough. But because you know that the universe conspires against Val, you know there's more to this story than a trip to town to drop The Pony off at his grandma's house. We called first to let her know that we would be arriving in about thirty minutes. The plan was to pick up a 44 oz. Cherry Diet Coke for her, and grab a sausage biscuit for Genius at the drive-thru. The Pony required no sustenance, thoughts of his imminent diet of Grandma's love already filling the void inside him.

I breezed through the soda bar, only to end up in line at the register behind a man buying a six-pack of beer and four dollars worth of lottery tickets. AT 9:30 IN THE MORNING! I know. Some people just can't put off their lottery tickets until a reasonable hour. A kid was ahead of me, too. Waiting for his brohans to pump some gas into a Mustang convertible. Twenty dollars worth of gas. Big spender. It takes eighty-eight dollars to fill up my Tahoe. Getting out of that parking lot was a bear. A snarly, tooth-gnashing, in-need-of-anger-management grizzly bear. Because there's road construction in that area, you see.

The roads were full of people who don't know how to drive as well as I do. Twenty mile per hour people in fifty-five zones. People with burned-out signal and tail lights who turned without signals. People with signal lights who were saving them for some grand occasion, who simply stopped in the middle of the road. Then turned. Cars swerving over the center line, then pulling off on the shoulder. Trucks. And that was just on the way TO Grandma's house.

I'll save the piece de resistance for the finale. So pardon me if I get a bit out of order. Put the cart before the horse. On the way home, I popped in to get my own soda. I went to the gas station chicken store, because, well, I didn't want those other people thinking I had already drank one 44 oz. Cherry Diet Coke and I was returning for another one. That's almost as bad as buying lottery tickets at 9:30 a.m.

Of course I got in line behind a chicken lady. She had four legs plus an eight-piece box. But I'm not one to ridicule people for their unconventional body composition. Her man had been pumping gas. He came in and grabbed his soda, making the checker all antsy waiting for Chicken Lady to pay. Of course she had to wait for her order to be boxed separately. Then she wanted five lottery tickets and five more of a different kind. She had gas. Plus the two sodas. And she pulled out her check book. Asked the checker her last name. Like she was writing a personal check. Then she asked the date, which was hanging on the wall. Then she grabbed the checker's pen, with the white plastic spoon taped on it for scratching off the verification on scratch-off tickets. And Chicken Lady proceeded to write out her check. Which she could have done while waiting in the chicken line.

Upon leaving the gas station chicken store and heading towards home, I hit three red lights. Of course I did. But while cruising under the overpass, the car in front of me made a U-turn. No signal, mind you. Just veered across the left turn lane, the opposite left turn lane, and into the going-the-other way lane. So I moved on up behind a twenty-mile-per-hourer, who got into the left turn lane by my first soda stop store, and stayed in the left turn lane. In spite of the fact that the turn lane came to an inverted V and then disappeared. On an uphill stretch. Just kept driving in the darn-tootin' middle of the road. I slowed way down to give it room. That car had a handicap parking tag hanging from the mirror. The driver was using one hand to steer, gesturing wildly in conversation with a burning cigarette in the other. Then, you might have guessed, came to a stop in the middle of the road. And made a right turn.

But this, THIS is the grandaddy of all incidents on today's ill-fated trip: 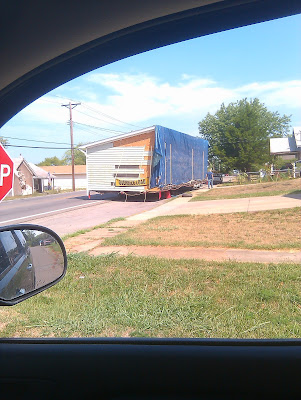 That's a road house. A house. In the road. On the main thoroughfare from my mom's house. I had to drive in the opposite lane to get around it. I really wanted this picture. So I went around the block. Yes. Now those folks who snicker that Val has certainly been around the block a time or two are validated. I am not one to endanger the welfare of others by slamming on my brakes and stopping to take a photo. So I stopped at this side-street stop sign. Looks like that house had a flat tire.

I know what you were thinkin'. That darn Val has been wicked-witching herself all over Backroads again, stealing ruby slippers, and this time, the house just missed her. C'mon. You know you were.

Today was definitely Friday the third-teenth.