POKER? He Doesn't Even KNOW Her!

Saturday morning, The Pony cleaned out T-Hoe and found a treasure. He carried it into the dark house and held it in front of the living room window with a glare of natural light behind him.

"Look. That picture Dad found in Grandma's garage when he and the ex-mayor cleaned it out." 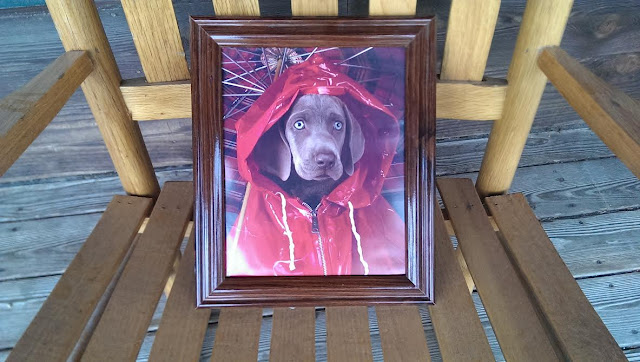 "What are you going to do with it?

And I have no idea why Mom had this picture in her garage. It's not even a real picture. There's a frame. But this is like a magazine cover stuck inside. Mom never had a dog that I know of. She said when she was a kid, her dad had beagles. But she never spoke of a pet. And she only tolerated our miniature poodle, Buster. So why she had a framed picture of a dog in a raincoat, under an umbrella, is beyooooond me.

Shhh...I don't want my sister the ex-mayor's wife getting wind of our windfall. She might come a-knockin'.