It Ain't a Fit Day Out For Man or Beast

We had a little rain here this weekend.

Let the record show that Backroads was safer today than any other day of 2015. On our errand-running trip this afternoon, The Pony and I observed widespread flooding.

The prisoners weren't about to tunnel out and pop their heads up like John Goodman in Raising Arizona. 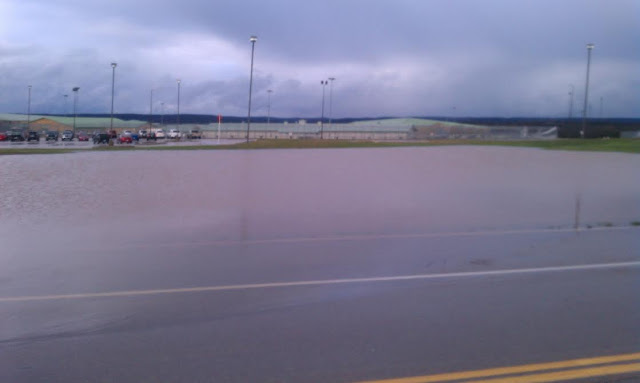 The water had bubbled up through the little sinkhole out front, inundated the grounds to the parking lot, and even come over one lane of the road.

Nobody would be dropped by an errant shot at the gun club, because the river was out of its banks. 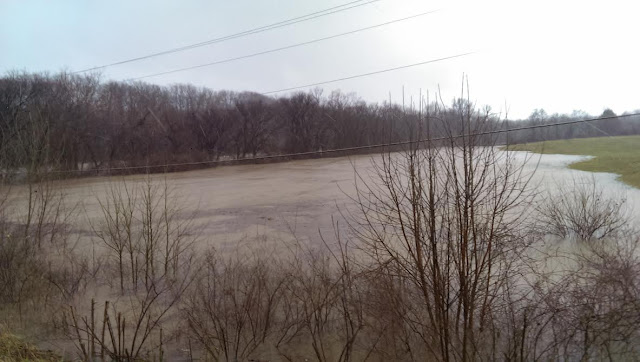 Yeah. That's not the river. The river is on the other side of those trees to the left. The gun club shooting grounds (All welcome every Sunday!) is the grassy area on the right. What's left of it.

THIS is the river: 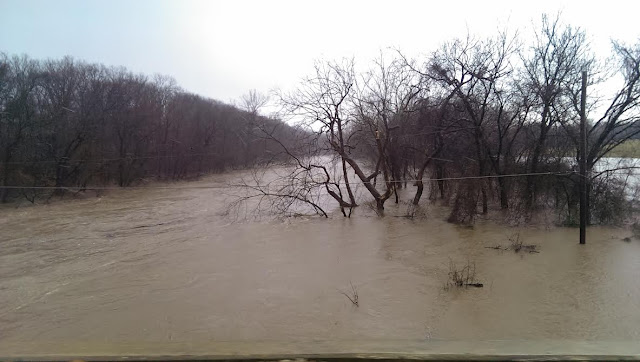 The mailbox thieves were not going to make a quick getaway today. Our creek was treacherous as well. Not the one I warned Genius about. That goes without saying. This is our bridge down by EmBee. Thank goodness the county road department replaced the old concrete slab low water bridge about eight years ago. Now we have a roundabout way of getting to town. But at least it's our second route, and not the third or fourth resort we had to use before, the last being driving twenty miles out of our way to hit the main highway. Which is not really feasible unless you're a teacher, and HAVE to get to work come not-heaven or high water.

Here is a view of our new whitewater rafting run, which you can ride for an extra fee when you take the deluxe tour of the proposed handbasket factory and Hick's Folly village. Oh. And a raft is extra. 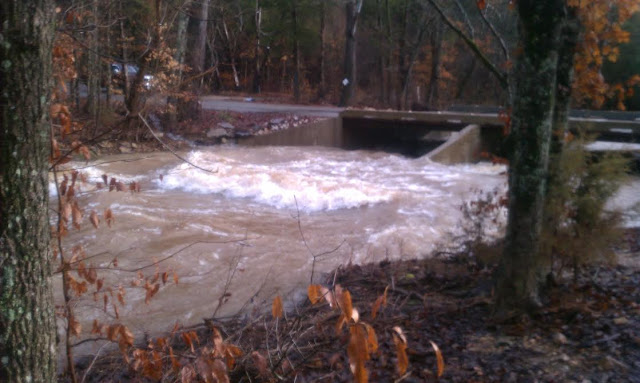 Let the record show that water would have been four or five feet over our old version of this bridge. And that it usually runs nowhere near that slanted concrete support, but down to a four or five inch trickle over flat rock, no whitewater.

I admit that The Pony and I were stymied by water over a culvert in town, and that we drove through it. But not until we saw an oncoming truck make it across with fairly calm water to the top of its tires, and only because we were on a blind curve hill and could not back up without risking an accident. Plus we were in our trusty 4WD workhorse, T-Hoe, and not in my new, untried, AWD Acadia. We also had to drive through a mini low water bridge to get farther than 1/2 mile from home. Hick had brought T-Hoe through it Saturday, so we knew it was safe. Enough.

This weather is for the birds. And for sturdy 4WD gas hogs.