Sometimes, the sitcom of my life takes a more serious turn. An event occurs that needs its own very special episode. A whole hour. During sweeps week. And as a show of good faith, I am willing to send the writers home. You heard me. No need for Rob Petrie, Sally Rogers, and Buddy Sorrell to burn the midnight oil. Some shows write themselves.

The Pony and I made a trip to the bank after school. We stopped at a local park to meet up with my mom and exchange a tin of pictures from 1984, a Zyrtec coupon, a bag of mini Twix and Butterfingers, and a baggie containing Christmas meat and a hambone...for last week's National Enquirer and Globe. Yeah. I think we got the long end of THAT stick. We proceeded to the dead-mouse-smelling post office to pick up two packages, one being special socks for Hick, the other an otter box. That's a belt holder for his phone. We're not raising otters now, nor do we have them in our master bathroom vent fan/light fixture. We scurried on home, up our muddy gravel road whose gravel had disappeared like granny panties in a septuagenarian's buttcrack, over the area where ice had still been packed as recently as this morning. An altogether uneventful trip.

Genius arrived a scant ten minutes after we did. The Pony was out gathering THE EGG that we get each day, rain or shine, twenty-nine out of thirty chickens being slovenly layabouts who can't be bothered to propagate. He had just stepped in the front door with his little basket when Genius blurted, "So I guess you guys saw the arm?" I'm getting a bit hard of hearing, it seems, or kids these days talk in some kind of code. But The Pony gave him a crazy look, too. So I figured I must have really heard that sentence. It's not like the talk at the teacher lunch table of how a kid kept singing "Elvira," but thought it was called "Hellfire."

Genius grew impatient with our slack-jawed countenances. He whipped out his phone and shoved it under my nose. Even without my bifocals, I could understand what he was getting at. 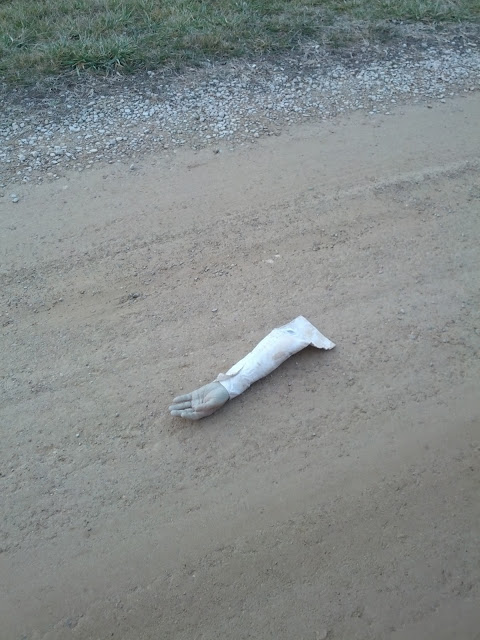 That's an arm. A road arm. On the road in front of our property. It was not there when The Pony and I went by, but Genius stopped for a picture a scant ten minutes later. The first thing I asked was, "Oh, no! Are you the throwing-arm killer?" Not such a nice thing for a mother to ask, I suppose. But I was 99 % sure that Genius was not. Though I was relieved when he denied it. The second thing I asked was, "Is it REAL?"

The third thing I asked was, "Where did you say that is?"

"On the road in front of our new land. Not up on the hill. Right beside us."

The fourth thing I asked was, "Will you send me the picture?" It's not every day that a theme for a very special episode of the sitcom of your life falls right onto your road.

"AGH! Do I HAVE to? Why can't The Pony go get you a picture on your phone? It will take forever to send it. He can run over there and get it."

"WHY? I just came in from gathering THE EGG! I don't want to go back out in the mud."

"Yeah. Why should he run all the way over there? If it was you, you'd jump in your truck and drive. He can't drive."

"Technically, I CAN drive. It's just that it's not a very good idea."

"Forget it, then. Never mind that I can do everything for everyone, from birth to now, but nobody can take a picture of a road arm for ME while I'm in the middle of making supper. Fine."

"All RIGHT! I'll send you the picture."

Hick came home. Nary a word was mentioned about an arm in front of the Thevictorian spread. We ate supper. All dispersed. And now that I'm elbow deep in The Great Road Arm Mystery, it seems that I must ask Hick if he saw it. Because it would be SO like him to drive right by. "Huh. A road arm. Somebody's gonna be looking for that."

After interrogation from The Pony, let the record show that Hick did not observe an arm in the road when he arrived thirty minutes after Genius. The first question he asked was, "Is it real?" Is it just me, or does it seem like we Thevictorians are just too nonchalant about a possible severed arm laying on our section of gravel road? Oh, how times have changed. Beaver and Wally would have been all over that arm. And Ward would have taught them a lesson.

The original owner of the road arm must have come back and picked it up. Or else we'll find it on the porch in the morning, courtesy of one of the fleabags who call this place home.

Just another thread in the rich tapestry of Val Thevictorian's life. Suitable for sitcoming.