Yesterday I mentioned how Genius spent an evening building a photo opportunity out of a wooden speaker box, a Solo cup, and a mutilated balloon. He was not satisfied with his results, and plans to refine his process at a later date. Until then, he has graciously consented to share his first attempt. 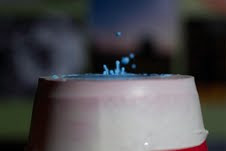 This is the set-up. He had already dismantled his rig, so he did not have a picture showing the speaker box and camera. He was going to snap a photo of that with one of his other cameras. The lesser babka of his picture-taker stable. So what we have here is a sliced-off section of a white balloon stretched over a mutilated red Solo cup, which is jammed into a wooden speaker out of range at the bottom of the pic. He used acrylic paint mixed with water. That's the main component that he wants to modify, to get just the right viscosity. And when he works out the bugs, he will put the whole thing in front of a black or white background, I'm sure. Depending on whether he uses the white or the black balloon.

Here's what he's going after: 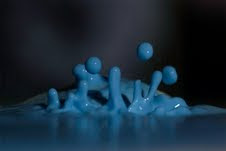 He eventually wants to use multiple hues that shoot up independently. He gave it a try, but they ran together. He had taller columns, but I liked this one. Genius had to crop these photos so I could load them in less than thirty minutes apiece. My internet leaves a bit to be desired. So you're missing a part from the left edge that has balls of watery paint bouncing on the mini-lake of watery paint. Surface tension, you know. That's what surprised him, that the drops didn't flatten out into the lake upon contact, but bounced a couple of times, maintaining their spherical shape.

Perhaps Genius will treat us to more colorful eye candy when he refines his techniques. He has more pressing things on his agenda tonight. Namely spending the night at a friend's house, eating pizza, taking photos with glow lights, and watching anime. I told him that sounds like something people do when they're high.

He assured me that they're not. That his friend's mother is just like me.