Yesterday, I mentioned how our lunch at the casino was delayed a bit, thanks (and I do mean THANKS) to my sister the ex-mayor's wife, who's a low-roller. Sis always bets 30 cents, or the lowest option available. She seeks out slots with such low bets. Hick is similar in the way he rolls, but will try other slots, and if he gets ahead, will jump up his bet for a few spins. The Ex Mayor and I have comparable gaming habits. We play slots we like, that are more volatile than steady, and are not afraid to bet $1 or $1.50 a spin. It's great if you win, but you'll lose your shirt if you don't. We always enter a casino with a shirt we're willing to risk.

Anyhoo... the plan was to meet at noon to use our $10 comps for lunch. Sis was the only one of us who had not earned her points yet to qualify. I arrived at the entrance to the grill at 11:50. There is a row of older slot machines along the wall there. Hick has won on them before, while waiting. I was just above even, and didn't particularly want to risk any more of my bankroll in throwaway gambling just because I was bored. However... Val IS a gambler.

I intended to play a Mystical Unicorn slot. I've played one once before, and didn't win, but it was the only slot that I recognized. Just as I stepped up to pull out the chair, a guy to my right moved over to the seat right next to it. No thank you. I'm not sitting elbow to elbow with a stranger to lose more pre-lunch money. I moved left, towards the grill entrance, and saw a faded slot that stood out because it was pink and not shades of brown and blue.

Hick came up behind me as I fed in my $20. That was ALL I was willing to wager on it. Of course Hick was a distraction. He tried to play a slot next to me, but it wouldn't react to his touch. Neither would mine! I tried the SPIN button, and one in the top row. Nothing! It had eaten my money, though. Hick's machine let him cash out the ticket he was playing on, and he moved over to a slot just like it, which let him play. "This one works!"

I turned back and tried mine again. I pushed the PLAY 5 LINES button. It worked! Imagine my surprise when I looked at the screen, and saw that I HAD BET $5. That's too much! Even for Val! Looks like it was the BET 5 button. Of course I was upset. I had assumed it was a $1.25 bet. You know, a quarter a line, five lines. I didn't see the denomination on the slot. That's what I get for being an idiot. It was apparently a DOLLAR machine, which I couldn't tell until a bet was played.

Now I only had $15 to lose before lunch. I made sure to push the BET 1 button. I must have done five spins, winning back small change, when somehow I got a BONUS! That was 15 spins! They were good ones, too. Hick kept looking enviously at me as my machine played loud bonus music. No volume control on this old thing. By the time it was done, I had won $68.50. THANKS, SIS, for being late to lunch. I cashed out right then, and watched Hick until we had lunch. 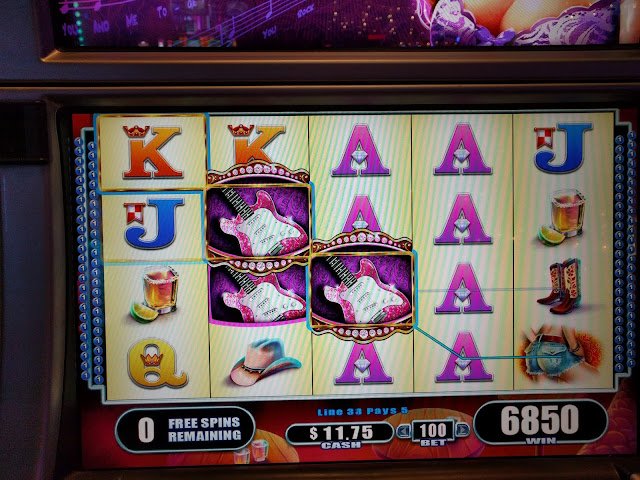 This was some kind of country cowgirl singing theme. That's the last screen of my bonus. I guess the guitars were wild, and that particular combination won me 5 cents.

The most exciting win had come about a half hour before lunch, when I recouped some early losses on a Wonder 4 Boost. I've played it in Oklahoma. Since I was playing four screens at once, I had a choice of Wild AmeriCoins for $2.40 a spin, Buffalo Stampede for $1.60, Rhino Charge for $1.60, or Whales of Cash for $1.00.

I'm a Buffalo Val, so I started playing that. After a couple spins that didn't even win back my bet, I switched to Whales of Cash. I've only dabbled in it. I don't understand what symbol pays the most, or how to bonus, but I know that whales seem to be wild, with a multiplier. Whales earned some of my money back. In fact, I was back to over $20. I threw caution to the wind, and hit the $2.00 bet. I GOT A BONUS!

Even better than getting a bonus, I looked at the screen that gave me the bonus, and that screen itself had won $100. 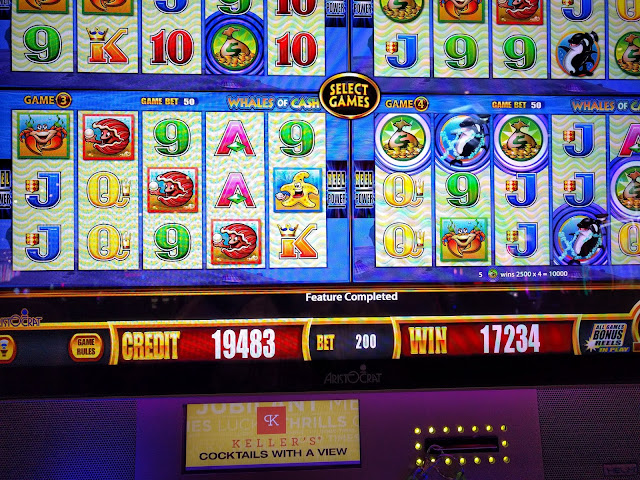 Does that mean I was a winner for the day? It wouldn't be gambling if you just walked in, increased your money, and left! I was there to play, so of course I risked my newfound riches.