Almost as Much as Sally Field at the Oscars

Hick took his white chamber pots (dishpans, according to him, which was factually correct, but not as much fun to chastise him about) off the outer garage wall like I commanded. Now people driving by (all 15 of them) can't see that eyesore from the road. Because, you know, I'm very concerned about my public perception! Nobody wants their garage to look like this: 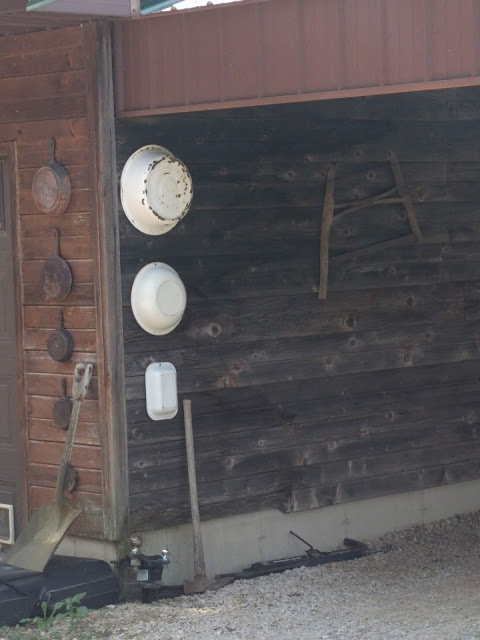 In the place of chamber pots, Hick decorated that wall with more of his junk. At first I was skeptical. I didn't realize that his willingness to follow my command to remove was tied with a plan to replace. I saw his handiwork when I left for town, and I must admit,

Oh. Did I already mention that? I'm just so shocked that Hick has done something of which I approve. I meant to get a picture when I returned home, but Hick was there, with SilverRedO parked in the way. He'd already sent me a picture, though. Once I opened it on New Delly, I was a bit disappointed. Perhaps Hick should not have stood with his phone in the sun when he took the picture. The contrast is not up to my standards. But here it is: 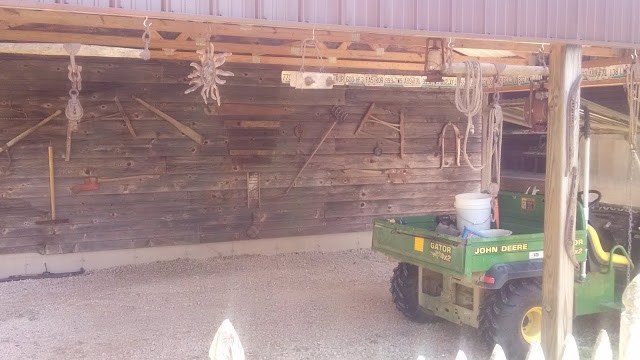 I suppose if you can zoom in, you might see the collection. I'll try to describe.

Starting on the left side, we have a log-rolling tool. Hick's picture has cut off the very end. Below it is a tool for driving railroad stakes. Next, we have an old-fashioned saw. There's another one mirroring it on the right, which you can see better. The red-ended thingy is a tool for cutting cornstalks.

That big flat blade thingy is actually a board, according to Hick. He says it is for digging holes for planting seeds, and has a hook on the bottom end. In the middle, we have a decorative flat-thingy arrangement, with a saw at the top. The wooden boards are levels, according to Hick. They have a little round thing with water inside. Like how a modern metal level works. Then a slicer-dicer dealybobber, which Hick says is a cabbage shredder. Below it, looking like a hot-cross bun, is a strainer. Next is a rake. I knew that one myself! The round thingy is a damper for a stove flue, so all the heat doesn't get out. Then that other saw, with a little cast-iron frying pan below it, and another cornstalk cutter. On the far right is a hames, from a horse harness.

In the foreground, hanging from the edge of the carport roof, is a block and tackle. A couple of them. And a more modern decorative sun thingy. The board thingy with two nipple-looking large screws is a fence stretcher. For a metal fence, like with that diamond pattern. The back looks just like the front. You take the boards apart, and then screw them on a metal fence, and hook up the chain to pull with a block and tackle to stretch it as you're putting up the fence. A Dietz lantern. And something nailed to the post, which Hick says are hames from a harness.

More on this fence stretcher thingy. You put it on the fence in the up-and-down direction, and hook the block and tackle to that chain, and pull sideways. I don't know why Hick couldn't just explain this to me without playing 140 questions. He says that is actually a small fence stretcher, and it would take at least two of them to work right. He also neglected to start out by saying that you do this after you already have one end of the fence stabilized with something, like a corner pole. He wears me out, that information-miser.

I do like the wall arrangement.
Hick might want to start a side business as an exterior decorator.
Posted by Val at 1:01 PM