This morning I got up bright and early at 9:15. That's fifteen minutes EARLY, people! I got up early so I could leave the house and go to Walmart (Hick got almost everything on the list I gave him the other day), and to pick up prescriptions, and of course get my very own 44 oz Diet Coke, not some second-rate concoction dragged in by Hick.

Anyhoo...first I washed up last night's dishes, then sat down in the La-Z-Boy with Shiba to spend fifteen minutes checking my blogs and the local newspaper online. But WAIT! There was no ONLINE to it, because I DIDN'T HAVE INTERNET!

Just when you have your whole day laid out ahead of you, bright sunshine, escape from the house, a tasty Diet Coke on the horizon, an afternoon and evening of internetting pleasure in your future...Even Steven jerks a knot in your tail.

Being a technology wizard, I knew just what to do. I restarted Shiba. Can you believe that didn't work? I tried to go to the number thingy in the internet address that will run a test and tell me my DISH internet connectivity. But I couldn't get that, because I HAD NO INTERNET! Funny how THAT works!

Then I went into the Network and Sharing Center thingy down at the bottom right of my lower task bar. That's what I call it, anyway. It showed me a big X between my house symbol and the internet. It took about 10 minutes, but somehow I accidentally found that thing in my left sidebar that says TROUBLESHOOTING. It's different on Shiba than on New Delly, so I doubt I could ever repeat the accidental steps.This troubleshooter told me that I had a bad IP address. The Not-Heaven, you say! It also mentioned the modem.

Well. I really did not want to disturb Genius at his new job. But I also wanted internet. I went down to my dark basement lair and turned on the lights and New Delly. Just on the off chance that ancient Shiba was the only one having problems. She was not. I tried all that stuff again on New Delly, and finally found the troubleshooter. Then it was time to bother Genius.

"My internet won't work. Can't get into the number thingy. Troubleshooting says modem has connectivity issues. It says to turn off the modem and unplug it for 10 seconds, then plug it in and turn it on. Now...WHAT'S A MODEM? Is that the thing by the basement door where the wire comes in?"

"Okay. Not sure what the one in your desk looks like. I get it confused with the router. Have them both off at the same time, or do one, then the other?"

Yeah. That only took me 30 minutes from start to finish. And only 15 minutes of Genius's time. Lest you think this was a simple task for me, here's what I was dealing with. 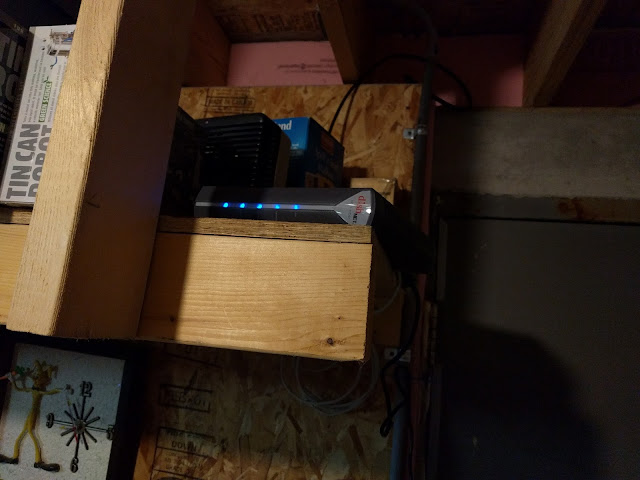 The dreaded workshop modem. I can't even see it. I can't pull it down, because the wire is so short. I can kind of tilt it. No power switch. I can't pull the wire out of the back, but I figured out where it runs down to an electrical receptacle. But that was behind the box holding the artificial Christmas tree. Don't get me started on that creepy hideous clock that Hick had before we got married. It turns up in the oddest places.

Oh, but that was simple, compared to figuring out what resides in Genius's desk. 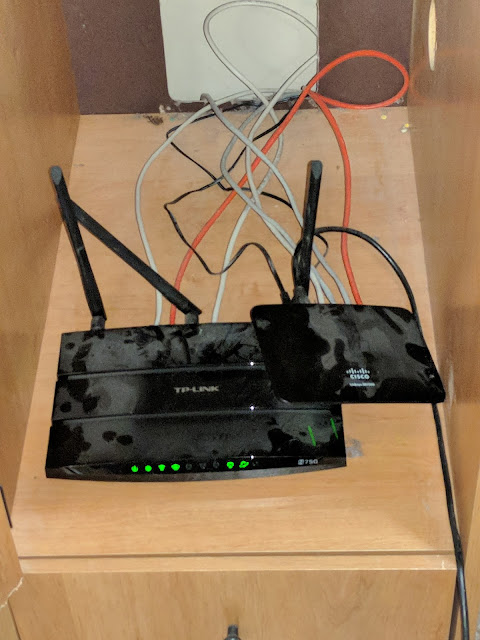 I still don't know what these are, but you can bet that I yanked the power cords out of the back of both of them. Located in different areas, of course. That I couldn't even see until I got a mini flashlight from my office, and wrestled them forward on their short respective leashes to see which of the wires actually was the power cord. The flash of my phone camera did an excellent job of illumination, though.

As you might guess, I am not in the habit of dusting these thingamabobs.

Whew! That was certainly a relief that I was able to fix my own internet! I thought I might have to call blog buddy Joe H. I hear he's a wizard at stuff like that...