Hick has been hard at work cleaning out his storage units. As you may recall, he bought 18 of them, for a price of $1100 cash. Today, he gave me back $500 to return to our checking account.

Hick sold three of the units to his second son, The Veteran, for $350. If you are good with math in your head, like Hick, you'd know that his 18 storage units cost him an average of $61.11 each. Yes, I used a calculator. So, again using a calculator, I figure that on those three, Hick has made a profit of $166.67. Not too fond of those three sixes together...

The three units that The Veteran bought are stuffed full of things that Hick hasn't seen yet, but knows can make him a profit. However...he doesn't have the time (uh huh, my TOLD YOU SO was hard to keep trapped behind my lips) to sort them out and store them. He has eight units that he's currently dealing with, having trashed or transferred the contents of the others to his new Freight Container Garage. He thinks he might pay the rent on two of his newbought units, and keep some of the bigger stuff there to take up to his Storage Unit Store on good-weather weekends, on his trailer, so he can bring them back if they don't sell. 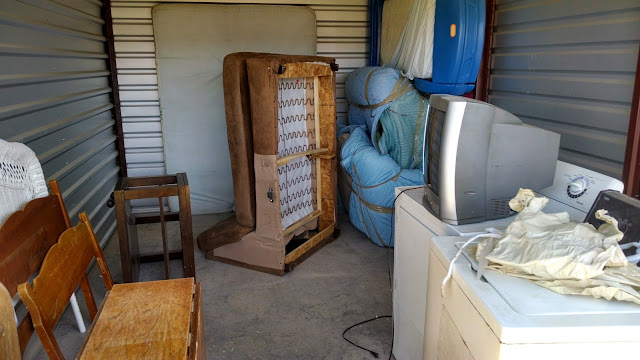 Here's one he took the picture of after taking some stuff out. He's not very good at following my instructions, our Hick! The up-ended couch is trash. He brought it home and burned it. Wrapped in blue are a leather loveseat and chair that he's planning to sell for a couple of hundred dollars. Above them is a car bed like Toddler Genius used to have. Hick already burned that mattress, and the one leaning against the back wall. He thinks the washer and dryer are operable, but he's going to pour some water in the washer to try it out. The TV is junk, even if it works, because Hick says even Goodwill and the church stores won't take them anymore. However...around here, I could imagine kids using it to play their video games or watch DVDs on. I had a lot of students talk about not having regular TV, but watching movies every night. Backroads isn't really an enclave of Rockefellers. Hick's favorite item here is the table in the left foreground. It has sides that fold up to make a regular size table. The only drawback is that is has only three chairs, not four. 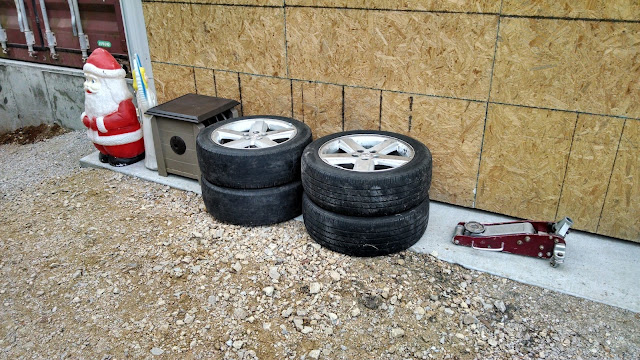 These treasures also came out of that unit. Hick is keeping Santa and the Angel. I don't know why he made her face the wall. The wheels are off a Dodge car or truck. The tires are slick and useless, but Hick says he can get $25 apiece for the wheels at the junkyard. The jack is broken because they tried lifting something too heavy, and a little knob/arm/sticky-outy-thingy that pushes must be welded to be replaced. Hick thinks he will probably just sell it for aluminum scrap, but if he can find someone to weld for him, he might fix it. That box is a holder for garden hose. He might keep that as well. You know, because we can't have our grounds looking all junky. 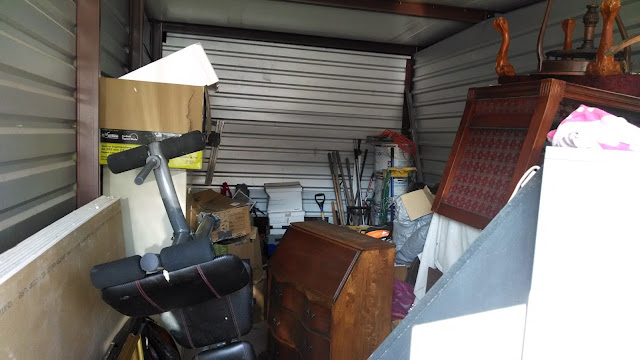 Of course the best thing in this unit was already spoken for when Hick bought it. The desk. It's old, and the only thing wrong is a broken leg. The owner of the business told Hick as they looked over the 18 units that his son had dealt with the renter of this one, so had first pick. He said he wanted the desk only. The weight bench is in working condition. I don't know if there were weights in this unit, but Hick has another one with a really good weight bench and a treadmill (clothes rack for some!) and weights.

So...right now, I have recouped 45% (gotta love a calculator) of our investment money back from Hick. So he's not in the doghouse, and he's out of OUR house, and having a good time, with visions of a small fortune dancing in his virus-clogged head.

HOS (Hick's Oldest Son) has been helping him haul stuff intermittently, and for his trouble, was awarded several pairs of Wrangler jeans, flannel shirts, a jacket, two jugs of laundry detergent, and a large projection TV that he wants for his son to play games on and watch movies! HOS's son was awarded (free of charge, on the condition that he helped without whining) a small hatchet that he wanted to buy with his two dollars, which Hick would have sold for five dollars.

Everybody's happy.
Except maybe the people who didn't pay their storage fee for three months.