Things That Go Dark in the Night

Here's your tale for Halloween.

Last week, Genius had a laptop malfunction. REE-REE-REE! Cue the stabby Psycho music. Okay. That's not the scary part. It was scary only for him, lover of electronics, never met a piece of technology he didn't cherish, computers as his future bread-and-butter. He tried his laptop one morning and the screen went black. Genius knows his way around a computer. Even an Apple. He could not figure out the problem. He was strapped for time, doing the majority of his work for a big computer science project that was due in several days in the college computer lab. I asked why he didn't use his desktop at home, but he said it ran Windows, and he needed one that ran something else, I caught "Linux" and the other I'd never heard of. The lab has a couple of them.

A few days after the fiasco, Genius was getting ready to take his precious gewgaw to the Apple store for a diagnosis. At that time, one of his housemates confessed to having used Genius's laptop (with permission) and accidentally (one would hope) spilled coffee on the keyboard and wiped it off. Genius said he volunteered to pay for damages, but Genius did not think he had the money. Probably not. Apple opened it up and saw that it was liquid damage, and said they would replace one part (the name escapes me, because I am not really on speaking terms with technology) for $1800.

Genius (meaning his college fund, which I dole out as need be) paid $2400 for that laptop new, two years ago. He was not about to fork over that kind of money, so asked me to give him the balances in his college savings account and CD so he could figure out if he could afford another laptop. He plans to sell parts of the other one and recoup about 3/4 of his expense.

I don't carry that info around in my noggin, but I had just re-apportioned the two accounts when the CD came due the first of October. I had the receipts for the transfer and new CD right there on the kitchen counter. I was standing there in the corner where the sink part of the countertop joins the stove part of the countertop. I turned to yell over my shoulder to Hick in the living room La-Z-Boy.

The lights dimmed. I was not happy about that. A couple times that week, the power had gone off and come right back on. We have surge suppressors for the major electronics, but I have to reset the microwave clock, and it messes up the clock on my nightstand, and the DISH receiver takes a while to reset itself. I turned and moved to the cutting block, the better for my complaints to fall on Hick's deaf ears in the living room.

"GREAT! The power better not go off! I still have blogs to write! That would be just my luck, get supper done with and then no internet."

"I don't know what you're carrying on about. Nothing happened. The power is on."

"For now! Didn't you see the lights dim? It's STILL dim in here."

Hick came to the kitchen. Probably for evidence to prove me crazy. Which wouldn't take much, lately.

"Here's your problem. You've got a light out." He pointed to one of the two round lights recessed in the kitchen ceiling. The one at the end over the sink, where I had been standing.

"Oh. That explains the dimness." I left the kitchen and headed for the bathroom before descending to my dark basement lair for the night, while Hick peered up at the light to see what kind he needed to buy on the way home from work the next day to replace it.

Yep. And it's remained on, unless I turn it off. Nary a flicker. Just like all the other days and nights when it has worked like a charm. 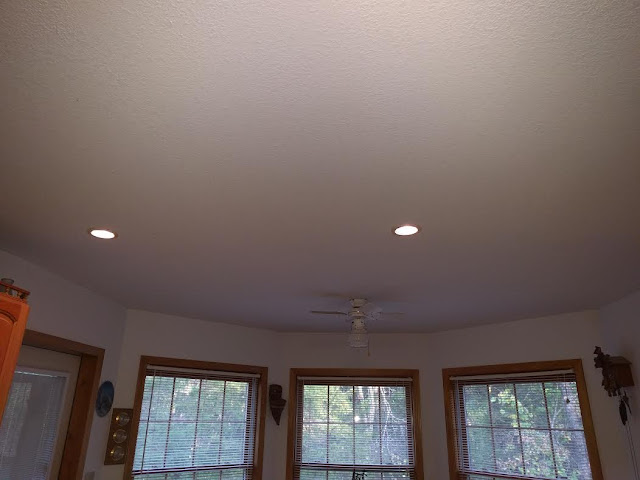