A Taste of Fall

I'm trying to sneak today's post past Even Steven and that harsh taskmistress Mother Nature. Storms are heading in, with a 90% chance for the time that I am usually burning the bedtime electricity. Don't expect anything elaborate. My power just went off and snapped back on at 4:15, so this is a rush job.

Lookie what I saw on the way to town: 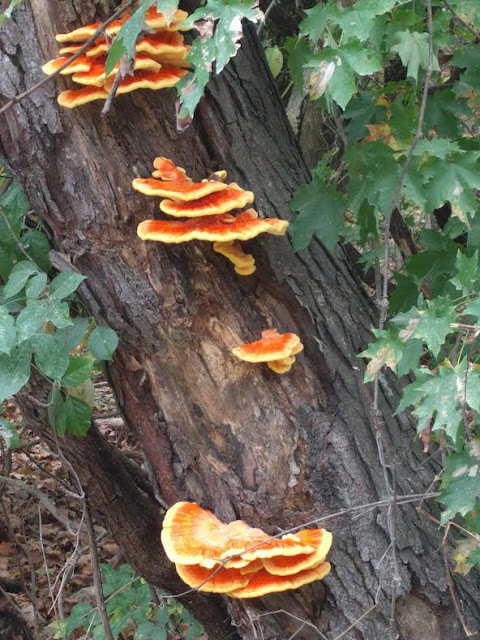 Isn't that stunning? All Halloweenie and autumnish? It's on a tree trunk behind EmBee's mailbox condo down by the creek. I have blogged previously about it, but that was way back in 2013, and on my supersecret blog. So I think I can get away with a not-quite rerun without the angry mobs waving pitchforks and flaming torches. But that would be pretty, too, right around dusk.

Today was overcast, so the colors kind of pop. The old photo taken on an old phone (perhaps the future toilet phone, or perhaps the Genius hand-me-down before that one) was not as colorful. It was, however, later in the evening, and later in the year. Maybe fall came early this year. Maybe not. I think the temperature hit 90 yesterday.

This fungus supposedly tastes like CHICKEN! Doesn't everything? It's called Sulphur Shelf Fungus, or the Chicken Mushroom.

You are welcome to bring two slices of bread and make a sandwich. Or I can sell the bread to you if you take the Shackytown tour before the leaves are off the trees.

Disclaimer: Not responsible for deaths or debilitating disease that may or may not be caused from eating a sandwich made with this fungus.