The Less Val Knows, the Better

Don't go thinking Hick is frittering away our future backyard-rock retirement nest egg by squandering a dollar on two dollars worth of pennies and three dead mice. He also gets things for free. And by free, I mean...um...I suspect him of...perhaps...you didn't hear it from me...GRAND LARCENY!

Last weekend, he hitched up his trailer and took it to work Saturday. You never know what Hick is up to. That one time he brought home the free hot tub that belonged to his boss's recently-deceased father. I was not such a big fan of that hot tub, so I don't even want to know what Hick will be bringing home next. Except he parked that darn trailer out front, by the new carport I didn't want, right where I see it after backing out of the garage each morning. 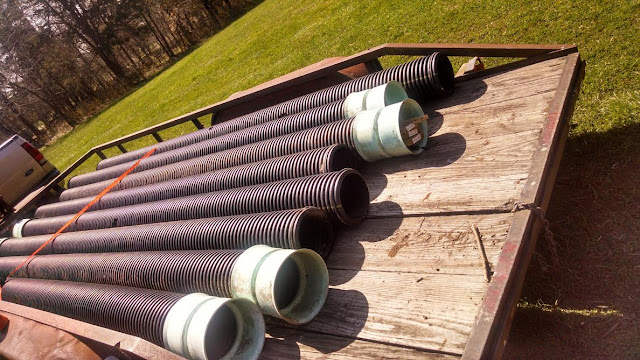 This past weekend, Hick was working up a storm out there by the carport. We'll get into that another time. But as I went to town Friday (when Hick was off work just like me!), I put down T-Hoe's window and asked him, "What is that you've got now?"

"Pipes! Those are worth about $100 dollars apiece!"

"How did you pay for them?" We have an ongoing battle concerning credit vs debit.

"Your boss just gave you a bunch of pipe for free?"

"No. They weren't from MY work. I got them at work. From the lot up behind us."

"Nobody. I went and loaded them up."

"Um. I believe that is called STEALING."

"No, Val. I told my immediate boss that I was going to get them. He said he didn't care."

"Yet they were not his to give."

"No. But they've been there over three years. And that contractor guy that was doing the work there before? He died. It was in the paper."

"Still. I don't think they were up for grabs."

"I don't know why not. Nobody has wanted them for three years. So I picked them up."

Let the record show that I was done with that conversation. And that the lumber stuffed inside one of the purloined pipes did not escape my attention. I waited until I got back home to ask about the two-by-fours.

"Pony! Those boards in Dad's free pipe? Did you guys buy them?"

"Uh huh. When we went down to Lowe's on Thursday night."

"You took that whole trailer full of pipe down there?"

"Uh huh. Dad didn't want to unload it or unhitch it."

Okay. At least The Pony is not yet an accomplice.