Genius Hits the Road and the Road Hits Back

No, Genius is not performing "Rock 'N Roll Star" like REO. He's not on tour with a band, though two of his housemates are in a band, and have the front living room set up for jammin'. Nope. Genius literally hit the road. Almost.

I hesitated to share this tale, not because it's a deep dark secret, but because every time I thought about it, I started shaking.

Tuesday night, Hick came home and tromped straight down to my dark basement lair. That's unusual. He most often tromps in the kitchen, says he's going to feed the animals and fiddle about in the BARn, and then tromps out the front door. So I was leery. Something was amiss.

"Genius texted me. HE'S ALL RIGHT. He had a wreck on the way home from work."

Of course the bottom dropped out of my stomach, and my heart fell through, though it landed safely on top of a slice of leftover meatloaf.

Let the record show that Genius is doing his co-op semester, which means he works 40 hours a week at a job that he is schooling to do. His job is in the city, and he drives from his college house, which takes him between 1:40 to 2:00 one-way, depending on traffic. So he's spending at least 3+ hours a day commuting.

"He's with the police now. He hit a semi on I-44. He thinks he fell asleep. He hit the wheels right under the cab, and ended up in the medium--"

"Anyway...he says he okay, but he's shaken up. He's going to text me back later." 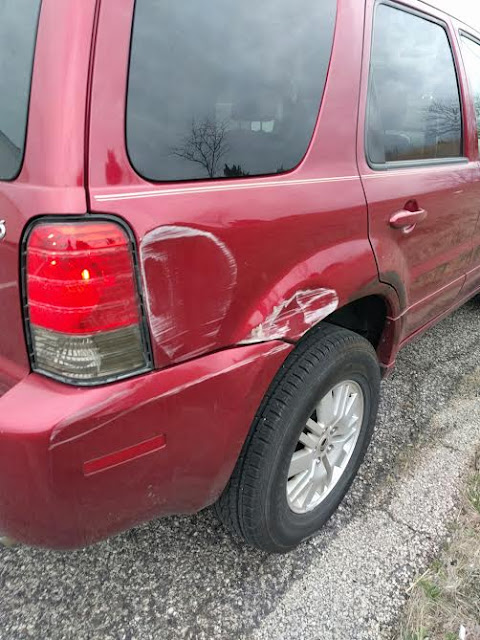 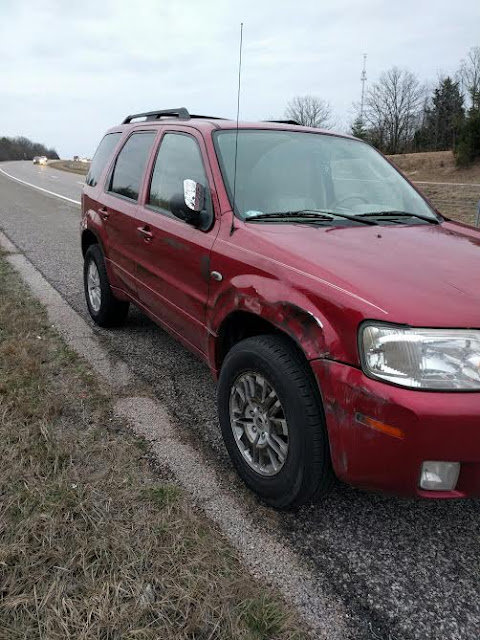 He was in the fast lane, and when the road curved left, he didn't. He woke up when he hit the semi, and jammed on the brakes, made a little trip into the median, and was able to get his car stopped on the left shoulder. Fortunately, there was no one following closely behind him. As soon as traffic cleared, he pulled over to the right shoulder and waited for the highway patrol. The semi and another one pulled off up ahead. The driver of the truck he hit didn't even know that a pesky compact car slammed into him, but the other semi driver saw it happen, and told him on the radio.

GENIUS WAS VERY LUCKY! Or somewhere in his youth or childhood, he must have done something good.

His car is driveable. The patrolman followed him down the highway for three miles to make sure, then told him he could go ahead and continue driving. The passenger mirror is destroyed. He has body damage to the front and back fenders. And tire marks all down the side.

BUT GENIUS IS UNDAMAGED!

He will have to appear in court or get a lawyer from Franklin County to handle his case. He has a C & I, which I call Careless and Impudent Driving. He could get points off his license, or even do jail time, according to my estranged BFF Google. There will be a fine, and if the truck driver files damages, he (meaning our ever-increasing auto insurance) will have to pay for repairs. But the good news is

Nobody was hurt. He was wearing his seatbelt. He had his insurance card. His car is functioning.

Our attorney (who could have built a wing on his mansion from all the business we've given him over the past 25 years) says that there's probably nothing we can do about the ticket, but that Genius must use a lawyer from the county where the accident occurred, and that a traffic lawyer can tell us if they can get the charges reduced so that there are no points off his license. Nobody knows right now, because we can't get the police report for 10 days.

Tomorrow...a word (yeah, right--a plethora of words) about the repairs.

Not to be overly dramatic, but now Hick changed his story after sending me a picture of the "victim" which was the semi truck. Now he says that Genius didn't go all the way in the "medium," only two wheels, which was good. And that Genius hit the wheels BEHIND the cab. Shown here. So now I am retroactively worrying that Genius could have GONE UNDER THE FLATBED TRAILER! Not that I'm overly dramatic or anything... 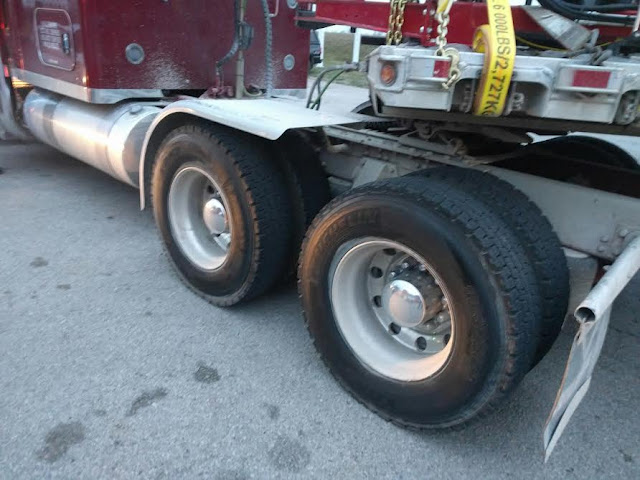