Something Snarky This Way Comes

Hey! Did you hear? Val had a visitor last Friday! Yes. A celebrity from the city. Perhaps you've seen her, hanging out on street corners in a T-shirt emblazoned with: Will Write For Food. Or maybe it specified: Will Write For Bolthouse Farms Vanilla Chai Tea and Any Form of Chocolate. Yes. Sometimes I call her Sioux, and sometimes I call her Madam. In any case, I was tapping my foot with excitement, counting down the seconds until she arrived.

I swear, it was like that time Jerry Seinfeld met Keith Hernandez! Not the part where Keith asked Jerry to help him move. The part where Elaine accused Jerry of acting like it was a date. Yes. I couldn't wait until time for Sioux to arrive so I could talk about myself!

Let me tell you a little something about Sioux. She is a real scofflaw. First thing she did was park her tiny little city car right beside a sign that said, "This lot is for customer parking only. Others will be towed." And that, my reading and writing friends, it a bit of foreshadowing. Not the towing part, but the law-scoffing part.

Sioux shamed me by wearing her Crocs. I know I should have been expecting that. But I, alas, did not wear my beautiful red version. I wanted to be sure-footed while piloting T-Hoe all around the towns. Sioux hopped in T-Hoe's shotgun seat bearing her likeness on a stick. Not just any likeness. Nothing handcrafted from student supplies while allegedly working off snow day hours. Nope. Sioux had an 8 1/2 by 11 glossy of her happy face, a photo fit for a queen, attached to a sturdy paint stirring stick. And all I had was my little ol' Val-in-a-Recliner. Country mouse, meet city mouse. I must say, being propped against Sioux's stick persona made this full-figured gal feel quite petite!

First cat out of the bag, I took Sioux on a tour of the old homestead. Out past the prison and through the woods, to Thevictorian house we went. On the gravel road, I tried my best to slow down. I gave Sioux a warning that if she had a spinal fusion, and this trip resulted in paralysis, that I would make sure to drag her body onto our land so her injury would be covered by our umbrella policy.

I couldn't believe that my sweet, sweet Juno did not bound out to greet Sioux like she does every other intruder, the UPS driver, and strange men who walk around the porch like they belong there. Nope. Juno cowered and whimpered like somebody stole her last egg. I don't know what was wrong with her. Perhaps she was embarrassed by her own unkempt appearance. Ann played nice, but we all know that dog has nothing in her noggin, not even a hamster on a wheel.

Sioux was kind enough to send me a couple of pictures. I did not even try to get some with my cell phone. I'm a terrible photographer. Sioux, on the other hand, had this magical device like a computer monitor screen. I think I've heard people call those things iSomethings, or notebooks, or tablets, or surfaces. Or maybe it was just a big flat camera. Anyhoo...she captured us in front of Gassy-G, the bargain auction grill with a hankerin' for Auction Meat. 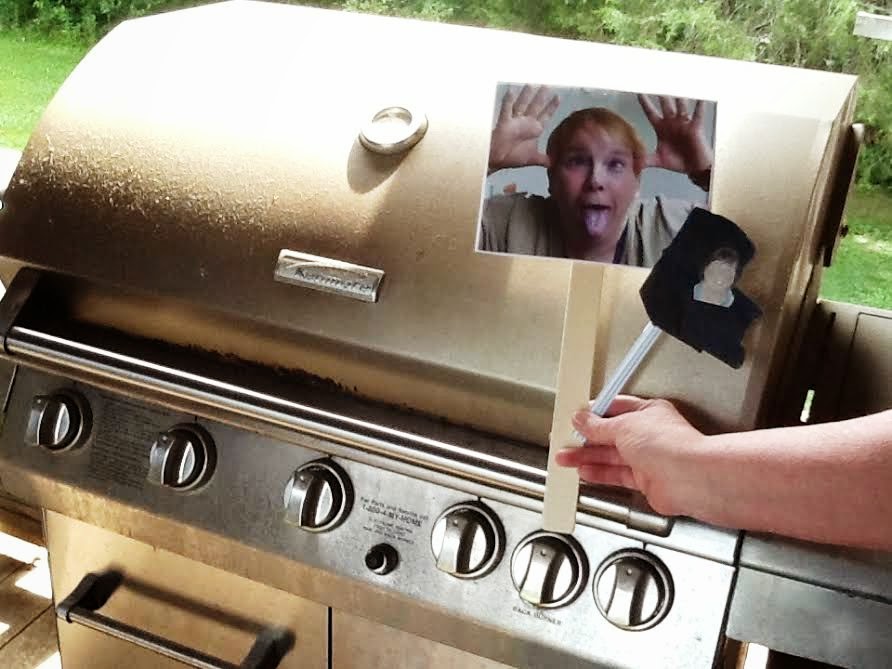 Sioux might have been experiencing a reaction to the dust on Gassy-G. I, however, was comfy in my recliner, having immunities to all particulate matter that flies around Backroads.

We stopped by the creek and EmBee, the mailbox, for more photo opps. I'd never seen so many cars and trucks come out our gravel road. They all stared at me like I was some city intruder enjoying their wilderness. People can be so rude!

From there, we headed to Voice of the Village. Sioux wanted a shot of the famous Diet Coke dispenser in this store where my magical elixir costs 80 cents or nothing, depending on who's working. People at the coolers near the juice had the nerve to turn and look at us. Took a step in our direction. I guess everyone in Backroads thinks they're invited to the party. 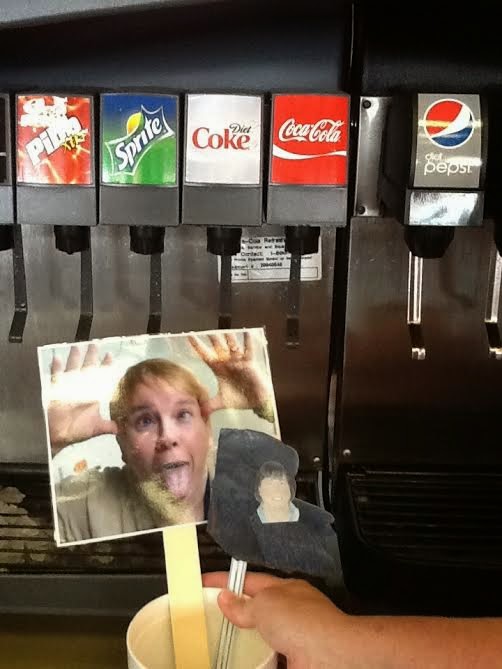 We took off for my mom's house to drop off The Pony. Sioux hopped out to get a photo of Stick-Sioux and Val-in-a-Recliner near the driveway. Mom ran out and asked what was going on. She thought Sioux was sticking a For Sale sign in the yard. Which kind of speaks to the size of Stick-Sioux. Mom being Mom, she forgot the elaborate scenario we had worked up, in which she would grab her quart of slaw and two spoons, and meet us in the yard. As punishment, I made her show Sioux her recent facial incision. AND SHE DID! No twirling that hair in front of it. I guess Sioux seems like someone who would want to see incisions on the mend.

Off to see my school building, though I was not about to venture inside for a third day in a row. No. The halls were being prepped for waxing, and I did not want to lose my head. Or have it get stuck under a faucet in the faculty restroom sink. Not that Sioux would have shoved it there, of course. I though Sioux would simply look at my room from the parking lot. But no! She jumped out with her picture-taker and charged the building. So bold, that Sioux! I jumped out so the inside powers could see me on surveillance, and not call the police on Sioux. Perhaps she mentioned in her account how a police car followed us around Backroads.

By now it was time to have Sioux back to her car before she turned into a pumpkin, or before her car was towed for not being a customer. But first we had one last stop. The gas station chicken store! And in honor of the upcoming birthdays of Sioux and Val, a tall cake sat in the grass, with a birthday wish upon it: Happy 150th! Yes. We look young for our age. A picture of that cake was not good enough for Sioux. She insisted on a picture from INSIDE THE GAS STATION CHICKEN STORE!

That Sioux has balls of steel. I presume. I did not check out her ball-attachment anatomy. That kind of thing is frowned upon, even here in Backroads. But what happened next was my clue. Sioux said I could sit in the getaway car T-Hoe if I was embarrassed, and she would go in and take a picture. Oh, dear. I know those workers in that cramped gas station chicken store. They can smell a stranger a mile away. And nobody could be stranger than Sioux with her iSomething, propping a giant head on a paint stick and a shrunken head in a recliner up against the soda spigots. It wasn't long before Sioux scurried across the parking lot. I may or may not have been in motion already, causing her to dive through the door like a hobo hopping a train.

"What's the matter? Did they give you the bum's rush? Grab you by collar and belt, and fling you out?"

I ferried Sioux over to her tiny little city car, which was miraculously untowed, and she gave me some fudge for not abandoning her on a canoe trip down the big river for toothless men who like purty mouths to find. I must admit I felt a bit guilty. I think I had lured Sioux here under false pretenses, having promised her lunch, then not giving her so much as a gas station chicken leg. Que sera, sera. At least I already had the fudge in my hot little hands.

It was a wonderful day. One more thread woven through the rich tapestry of my life.
Plus fudge!