My Son and Husband Went Goodwilling, and All I Got Was This...

Genius has been home for Spring Break all week while we worked ourselves to the bone to send him away to college. There's an O. Henry vibe there.

Hick took Friday off so he could go Goodwill hopping with Genius. They headed for the city, because everybody knows city people have better junk than country people. Hick is always on the lookout for old-timey gadgets, beer and Coca Cola memorabilia, and chickens. Genius is in the market for an office chair to replace the one he got for $20 and took to his dorm room, and for cameras, lenses, and accoutrements that he can resell for a profit to fund his expensive photography hobby. He also has Hick trained to bid on these items at auctions.

The Pony and I had Friday off because it was parent conference week at school, and we stayed late two nights. We went about our day paying bills and visiting with my mom. I left The Pony with her to spend the night, and went back home to await the return of the Goodwillers. Genius had dropped Hick off for a doctor's appointment on the way home, and went to buy a new pair of shoes because his stink. While whiling away time in the waiting room waiting to be picked up, Hick sent me a cryptic text.

"Yeah. Got y prise." He's not the best typer or texter.

"I hope it isn't Auction Meat." In case you have forgotten, Hick bid on a box at the auction one night that was simply marked "meat," but the price went too high. THANK YOU, Even Steven!

That was enough for me. I refused any further communication. When the guys got home, I heard a crinkly sack. I thought perhaps Genius had picked up some fast food, since both had said not to prepare supper for them. Then Hick came into the living room with the sack. It was my surprise:

A BAG OF GUS'S PRETZELS!

Never mind that I can't eat a whole bag of Gus's pretzels. It's the thought that counts. Oh, and Hick ate one on the way home. But that's not the big news. Hick had to tell me of the bargains he and Genius picked up.

"What? Who juices cabbage? Are you sure that's what it is?"

"Well, that's what your grandma told me it was when I used to go visit and saw hers. And we got a kitchen knife..."

"Who buys a kitchen knife at Goodwill? We have knives. Your company MAKES knives!"

"It has a bone handle. And we got a round-ended shovel..."

"For what? To whack those roosters that jump at you and dig their spurs into your belly, like when you sent that little banty checkerboard rooster flying with the blue plastic snow shovel?"

"To use for digging, like when something gets one of the chickens. And we got a painting not on canvas but on a board, that Genius wanted..."

"Maybe there'll be a great master under the painting."

"Maybe. And we got a pair of needlnose pliers..."

"Those always come in handy, even if you already have about 100 pair."

"Can you get it open? Does it have a combination?"

"It has a combination, but you don't need to know it, because it works with any numbers, you just turn the dial and it opens. And we got two Oreo Coke tins..."

"I mean Oreo tins. And Genius found a chair! An office chair for his room. It's a really good chair, too, even if it IS missing an arm..."

"WHAT? Genius bought a chair with one arm?" Just then I heard Genius wheeling his prize through the kitchen. He pushed it across the living room carpet and plopped down, resting his right arm on the chair's lone limb. He sighed and leaned back.

I couldn't stand it any more. I was hee-hawing like a madwoman. "I can't believe you guys! Why do we need this stuff? I'm not juicing any cabbage, or shoveling chicken graves, or locking my valuables in an unlocked box, or stabbing people with that shiv of a kitchen knife, or framing a painting, or collecting Oreo memorabilia. And that pressure cooker is just going to put us on the watch list! But I will agree that except for missing an arm, that office chair looks like it's in good shape."

"Wait! The best part is...WE GOT IT ALL FOR SEVEN DOLLARS!"

I was afraid to ask where he got my Gus's pretzels.

Here's a picture of part of the spoils: 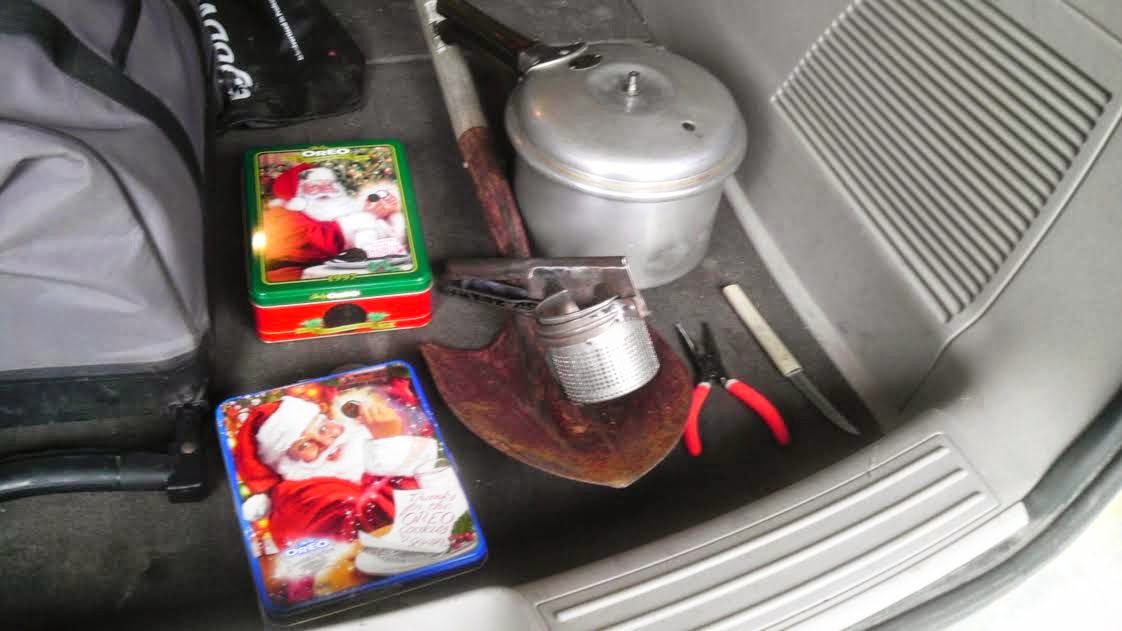