He'll Drink to That

Remember when Hick was brewing his own beer? It's READY! 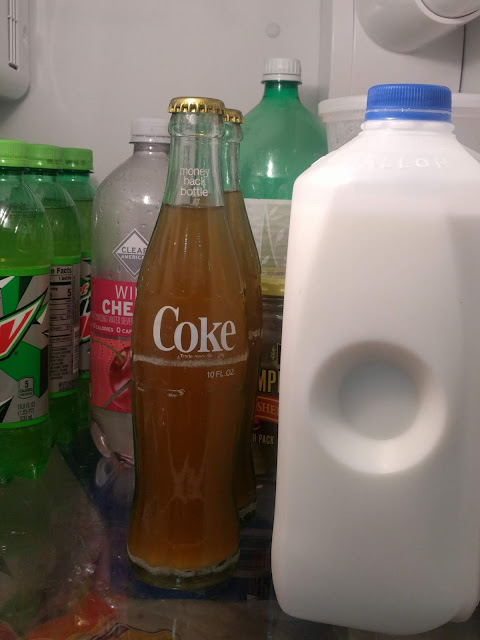 Actually, Hick's home brew was ready on Friday. He decided not to go to the auction that night. I don't think it had anything to do with his beer. It was a messy, snowy day. Maybe this isn't such a good auction. It's not like he doesn't go to three other ones during the week.

Anyhoo...Hick had mentioned earlier that his beer would be ready on Friday. That's because I thought he was neglecting it, and asked if it needed tending. I think his actual words were:

"I think I'll get it cold and try one Friday night."

Well, he forgot about the cold part. He came back from his Friday gallivanting and put a new pump in the big triangle bathtub in the master bathroom. I heard him thumping around upstairs. Then he stumped down the basement steps. I heard the squeak of the workshop door, and figured he was getting his beer to carry upstairs. After I heard him go up and settle in his La-Z-Boy, I sent him a text about supper, and asked if he'd be having his beer with it.

"Oh. I guess I need to come down and get some to cool them off."

Anyhoo...we had a Walmart deli pizza for supper, and Hick popped open a Coke Beer. It was 3/4 gone by the time I went to sit on the short couch to chat with him.

"I mean, like what brand of beer would it compare to?"

"All beer smells the same."

I was pretty apprehensive, because I could see stuff floating in the bottom of the bottle. But I took one for the team, so I could give you a review of Hick's Coke Beer.

"Oh. It tastes like Miller Lite, too. Only a heavy Miller Lite. Maybe just a Miller. It has that same aftertaste. Like metal."

Let the record show that Val is no beer connoisseur, and has not imbibed since May 29, 1992. However, her beer palate has remained intact. I was shocked that Hick's brew tasted like a commercial product. Not sure what I had expected, but this was encouraging.

"Tastes like beer to me," said Hick, tilting the bottle. "I think I'll drink it down a little more, and then pour it out."

"Yeah. Didn't you strain it? I thought Genius bought a strainer."

"He did. I DID strain it. But it has those particles."

"Well. I'm not so sure how well you cleaned those bottles to start with. Where did you get them?"

"From my collection over in the BARn. I boiled them! They're clean."

"Meh. I'm not so sure what is beer particles, and what was from the bottles to start with."

Anyhoo...Hick drank one of his Coke Beers, and seemed none the worse for it. I have been feeling kind of icky for two days, but I doubt it was caused by letting some Coke Beer touch my tongue. Much as I would like to blame Hick for one more thing...
Posted by Val at 1:01 PM