The Road to Good Submissions Is Paved With Text Intentions

I had grand plans to whip some writing into shape yesterday. I was going to be the Jillian Michaels, the Jane Fonda, the Richard Simmons, the Jack LaLanne of manuscript-shapers. Had it all planned out. Had my time budgeted the night before.

Yes, with Genius in Kansas, The Pony at his engineering camp, and Hick at work, I knew I would have a whole day to let my creative juices flow. I might even need a small kiddie pool to catch the overflow of my fertile mind. I planned the time I would arise, the time I would take my medicine, the time I would run to the post office, all the while my literary ingredients simmering on the back burner. Careful to leave a large chunk of uninterrupted time for writing.

I could not go the day, you see, without knowing:

~The IRS updated Genius's tax return information for the first time since March.

~Hick had plans to grill pork steaks for supper.

~Two of The Pony's PEOPLE were at the engineering camp.

~Hick was glad The Pony knew somebody at camp.

~Genius had Chinese for lunch with his Garmin team.

~Hick wanted vegetables to go with the pork steaks instead of green beans.

~Genius should get his tax refund by the end of the week.

~A random picture of SpongeBob's Sandy, sent by The Pony. 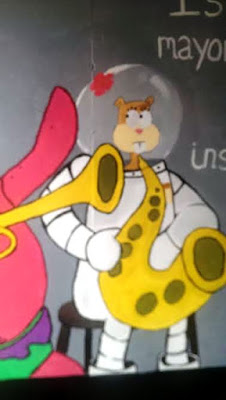 ~The Pony was mistaken for a counselor.

~The Pony had corn dogs for lunch.

~The Pony was doing an activity.

Oh, and a phone call, too. Hick was leaving work right then for his appointment.

I can't imagine why I didn't get more done. A phone call and 20 texts. That's not going to stop a real writer, is it? I must admit, I normally leave my cell phone upstairs when I go to my dark basement lair. But with The Pony two hours away at camp, I thought I would keep it with me for emergency notifications.

The emergency is that Val is not making progress on her writings!