The Journey of 659.7 Miles Ends With an Extra Step

Hick was out of town for a few days, for a reason which will be revealed when I'm good and ready. You'd think that after being away from Val for so long, Hick would rush right home, putting SilverRedO's pedal to the metal. Au contraire, virtual visitors to my lair! Hick had no qualms about stopping over, 30 miles from home, to do some Goodwilling.

I must say, he was in the right place at the right time to get this gem: 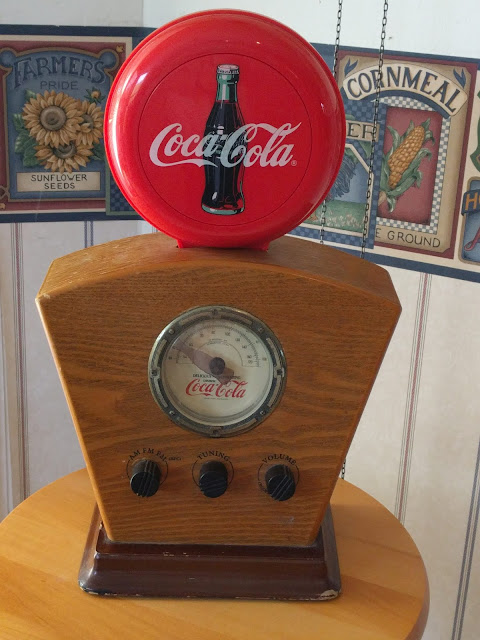 It's a RADIO! Hick parked it here on the kitchen stool. I just glanced at it as I walked by. That happens when new junk appears on a thrice-weekly basis.

"How much did you pay for your clock?"

"Yeah. The Coke clock on the stool."

"Does it run on batteries?"

Well. A broken radio is worth $12 to Collector Hick. He's pretty handy with electrical stuff, so he might get it working. It's a unique item that I haven't seen, either. Huh. They're probably for sale in mail-order catalogs, as new gadgets made to look vintage. Hick won't care.

I think his goal is to eventually have one of everything Coca Cola.
Posted by Val at 1:04 PM