What Do You Give a VAL Who Has Everything?

Anyhoo...this year, Hick gave me something better. A trip to a casino. Before you start lauding him as the best husband ever, let the record show that Hick's own words, upon the reveal, were:

"I don't really want to go to the casino, but I want to go down there and see about some guns at a pawn shop."

Yeah. But I'll take what I can get.

My sister the ex-mayor's wife, and the ex-mayor himself, joined in the festivities. It happened to be a day where the casino was giving away $10 lunch credits to anybody who earned 250 points between the hours of 8:00 a.m. and 11:59 a.m. Hick, Ex-Mayor, and I accomplished this extortion tactic, but low-rollin' Sis did not. Don't you worry about Sis. When I went to get my lunch voucher, I discovered that I also had

A $25 FOOD CREDIT FOR MY BIRTHDAY!

That's right. I treated all of us to free lunch on my birthday. Because I'm a giver like that. Okay, Hick and Ex-Mayor chipped in their $10 vouchers, and Sis contributed $2.07 from her player's points. She was like VERN in Stand By Me, with his 7 cents.

We ate high on the hog. As high as we could at the only casino restaurant open, which was a cafe/grill. BUT we all had dessert! And the combo that added fries and soda! Here was our feast.

The food was very good. What I ate of it. But I'm getting ahead of myself... We felt sorry for Hick, though, because his tiny square of Meat Loaf about the size of a brownie. Not at all worth the $10 it cost him on the SPECIALS chalkboard.

Anyhoo...we were digging into our meals (Hick was already on his pie) when the PA announcer cut into the old-people classic-rock music with the announcement of the 1:00 drawing winner. And it was

Oh my gosh! I've won that drawing there before, but I thought you had to be actively on the floor, with your card in a slot, to be eligible. In fact, we had bemoaned the previous winner at 12:30, since we knew we were out of the action.

Anyhoo...I only had THREE MINUTES to get to the promotions area and claim my prize! SHEESH! I haven't moved that fast in years! I was huffing and puffing, wobbling like a Terrible Tater on toothpick legs, when I arrived and handed over my ID and player's card. I was able to steady myself with my hands on the portable stage as the Promotions Gal made sure I was legal. Then she said,

"Now you'll go up on stage and choose your prize."

WHAT? I HAD TO WALK UP STEPS!

How unfair is THAT? Good thing it had two handrails. I don't go out step-walking all willy-nilly. But a prize was at stake. Here's the stage and the prize board: 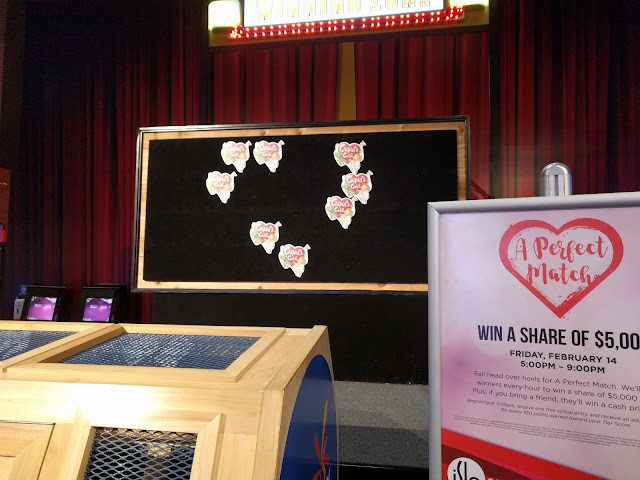 I pulled off the heart that is missing at the 5:00 position. Do you know what I won?

It was CASH, by cracky, not free play! That's what I like about this casino, even though it appears to have switched ownership, according to their website, not that you could tell by their sign out front, or their vouchers. 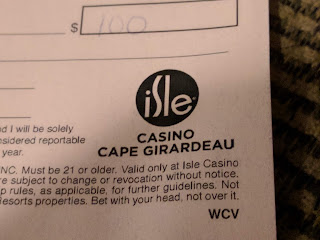 That's $100 for Val on her birthday! I asked the Promotions Gal what the highest prize was, and she said, "Two hundred and fifty. But you didn't get the smallest!"

I must say, by the time I got back to the lunch table, I sensed that my dining companions were less than thrilled for me! "You ALWAYS win! I don't know how you do that." Also, they had grown fat and sassy, and ready to leave the cafe. So I abandoned over half of my perfectly tasty crunchy tater tots, and a piece of Texas Toast. I was glad I'd had the foresight to eat my dessert first!

At least I had my $100 prize. Plus the $25 food credit, the $10 food credit, the $30 cash comp for the week, and the $20 cash I got from cashing in my player's points. I may have lost 1/4 of my casino bankroll playing slots, but I'd say I was adequately compensated for my birthday outing.