Hick had a grand old time Goodwilling in Oklahoma. Here are (his) pictures of what he got, and his own descriptions. I'm not sure how he managed to get such unfocused photos. It's an art, I guess. 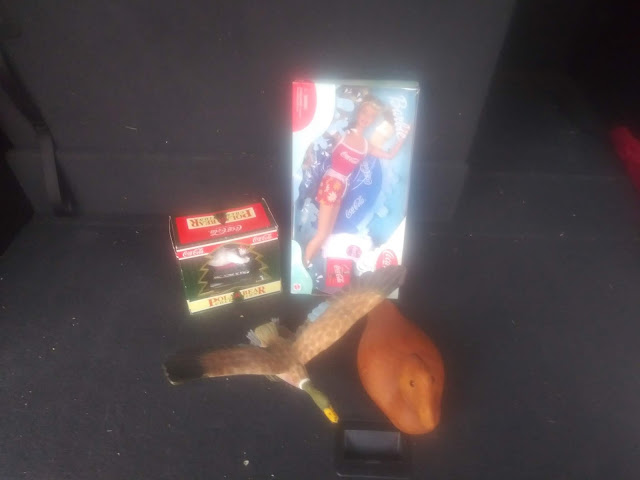 That's actually a Coca Cola Barbie that Hick didn't have. Uh huh. He collects Barbies. The Coke version, anyway. I think he already had two or three. One given to him by Genius, and one by me. I'm not sure about the ornament, or the flying duck. That decoy-looking duck is cool. It's solid wood, but the head is stuck on with a big wad of visible glue. The Pony said its eyes were creepy. It had a nice smooth feel, though I doubt that Hick has time to sit around caressing it. 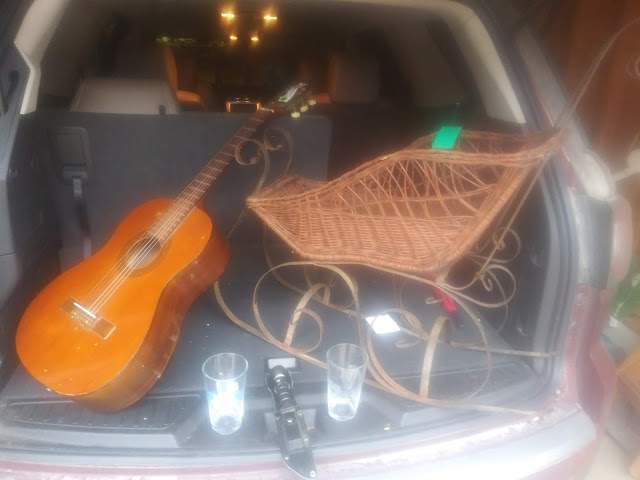 Looks like Hick forgot to mention that skinning knife. Heh, heh, good to see that he bought two glasses to haul 490 miles to make a hefty profit of 50 cents each!

I forget the brand of that guitar. He had the name, and a number, I think. Hick looked it up online, and also send a text to his musical instruments guy. The Pony got into the act with his phone, and the consensus was that the guitar would sell for $145 to $160 IF it was in good condition, with the case. The Pony also noticed that one of those twisty things that tightens the strings was not original, but different from the others. Hick's not greedy. He'd probably sell that guitar for a dollar profit!

I think Hick might have to sit on that sleigh for a while. Like until Christmas season!

Anyhoo...those are Hick's latest treasures, ready for resale when the weather warms up enough to get business booming again at his Storage Unit Store. Won't be long now!
Posted by Val at 1:08 PM