I'm talking about Hick's Storage Unit Store. Can't have anybody getting the wrong idea from my bait-and-switch title. I don't need a fine for violating the Truth in Blogging Law. I'm enough of a public enemy already, what with driving without a license for almost a month.

Hick is always re-stocking his Storage Unit Store. He sells a good amount of stuff, and buys new old stuff at auctions several nights a week. What he really enjoys, though, is getting something free from Back Creek Neighbor Bev, or one of his cohorts at the storage units. He makes sure to tell me,

"THAT'S where the money is! Selling something I ain't hardly got nothin' in. It's all profit!"

Let the record show that there's a custom at Hick's auctions. All the sellers put something on a table up front. Tickets are sold for a raffle of these items. The winner gets to choose ONE item from the table, and then the others are sold in the regular manner, by bidding. Friday night, Hick won the raffle, and chose a tool chest: 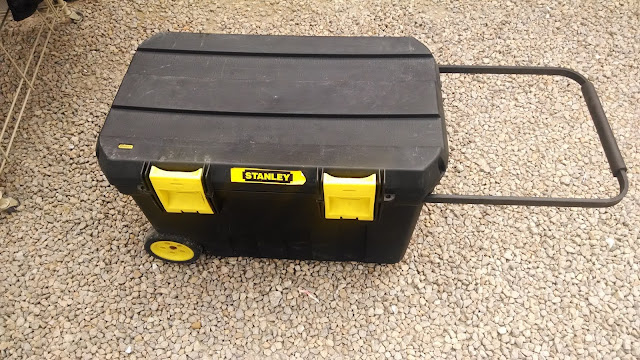 "I paid a dollar, which got me five chances to win. I picked a portable tool chest."

Saturday afternoon, I called Hick on the way home from town, asking about the picture he had forgotten to send.

Heh, heh. So there's the picture, in front of Hick's Storage Unit Store. According to him, the guy said, "What are you doing, taking a picture of my tool box?" I don't know what excuse Hick gave him. What a weirdo, taking a picture of an item he just sold. I'd never do anything like that...

According to Hick, this rolling tool chest is worth $79 new. I didn't find one for that price when looking it up. (It's always a good idea to verify Hick's information.) I don't know if this is the 24 gallon or 50 gallon tool chest. It was hard to find a picture like it, with the yellow wheels and yellow latches. Looks like it comes with a tool tray inside. Hick said the guy who put it on the table at the auction got all the ticket proceeds, which added up to $66.

Anyhoo... Hick says he sold it for $22.50, and the guy was happy to pay that price. He did NOT say that he got it for a dollar. Honesty may be the best policy, but sometimes it's good to keep some things to yourself. Especially when you're padding your UNIT with almost-free items.
Posted by Val at 1:03 PM